Some cars are really good from the factory and need little help to be made made super good.  Other cars are not so blessed, and need lots of help.

Something I’ve seen a lot of in modern performance cars, particularly turbocharged ones, is a proliferation of “magic little boxes”.  One of them is a manual boost controller.  Another is a turbo timer.  Then there’s the other one  to play with the A/F tuning and cam timing.  Before you know it, there’s half a dozen little black-box warts all over the interior with their knobs and wires everywhere.  Yuck!  I hate that sort of clutter, magicboxitis you might call it.

“-itis” is often used as a suffix to describe an inflammation of the -whatever, maybe it’s the tonsils or the colon.

The thing I’ve seen happen with these old muscle cars is a sort of steelitis.  The answer to almost every problem is to bolt or weld in some beefy looking steel braces.  Subframe connectors, watts links mounts, additional crossmembers for conversion to 3 or 4-link, roll cages, and extra tubes and braces in the engine compartment.  Certainly, when done right using good straight paths, these things can be helpful and effective, but so often the cars end up like tanks – strong but heavy.  Leaving one to wonder if the car is really any faster than it would have been with a flexible chassis, minus the 200lbs. of steelitis.

A big goal for this car is to keep the weight as low as possible – both in quantity and location :).  I’m going to be competing with better-balanced cars on the same size wheel/tire (well, many of the BMWs run 255s, but it’s close), so I have to do everything possible to keep my weight in the same range as them.  The RX8s are 26xx with about 50/50 weight distribution, the BMWs in the mid to low 2800’s also around 50/50 and the Subaru WRX in the mid 2800’s, with AWD, but nose-heavy and on 245’s.

I had a huge 33% (650lb.) weight disadvantage to the Civics when I ran the 240sx in STS, but I had some big advantages there too in bigger/better tires and RWD.  I think I can get the Camaro’s race weight a lot closer to the BMW and WRX weight than people would expect.  Doing so will be critical as I won’t have any sort of tire or drive type advantage.

To make it light, I will have to aggressively treat any steelitis flareups that occur, which is difficult because there are lots of pretty steel parts out there begging to be put on the car.  One slipped past my steelitis immune system today, the subframe connectors- 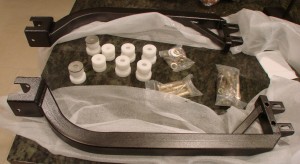 Actually I had made up my mind weeks ago to use these parts, and having them in hand was a prerequisite to the first big set of work I’m having done by someone else, which should be starting in a couple more weeks.

ST allows for bolt-in subframe connectors, which these are.  From a design perspective, I like them for a few reasons – one is they tuck up nicely next to the rockers, which should make it easier to get a good middle point of attachment between the SFC and rocker panel.  It also reduces the ground clearance hit from the parts; the car is going to be very low, and with the limo like 108″+ wheelbase, the car is going to want to high-center getting on trailers and stuff.  They’ll also make it a piece of cake to jack up the car from the side.

But man, the pair weigh 24 pounds!!  See, that undoes my 11lbs. of weight savings in rear springs, and another 13 pounds of savings from the HVAC system.  On the steelitis mitigating side, they are sprung weight, very very low in the car, fully between the axles so the “cost” of that weight is about as low as it gets, but still, ouch.

A quick aside about chassis stiffness.  People tend to go overly gaga about chassis stiffness and torsional rigidity.  The new Ferrari has 1x,xxx ft-lbs/degree of stiffness, the McLaren has this, that, whatever.  While important, I think it tends to be mostly overrated as a goal for people working with autocross cars, particularly those that won’t be running on big wide slicks.  The reason we need chassis stiffness is so that our suspension tuning  actually does something.  If we want one end of the car to offer relatively more roll resistance than the other, our tuning efforts will be stymied if our stiffening of that end gets absorbed by additional twist in the chassis.  If the car is responsive, has the balance you want, and is generally predictable to drive, then you aren’t going to find a ton of time in additional chassis stiffness.  In most cases, you will probably make the car slower, as the additional stiffness comes at a huge weight penalty when the car builder succumbs to terminal steelitis in the form of multiple strut tower bars, fender braces, 24-point roll cages, etc.

One other thing to note in the picture above, the little white cylinders.  Those are delrin bushings for the front subframe.  Delrin is a hard and durable plastic that doesn’t really compress, unlike the rubber bushings used in those spots by the factory.  In conjunction with the subframe connectors, those little guys will do a lot to “lock” the front subframe to the body of the car, and add some stiffness to the overall structure.   If our rules were more open I’d probably use aluminum in those spots because it’s a bit tougher, but we aren’t allowed to use metal bushings.  The Delrin should be fine really.  These bushings aren’t the whole subframe/body interlock story, there’ll be more coming later, stuff I’m still working on.