Stuff on Youtube usually looks a bit crummy, please feel free to download these if you have a decent internet connection.

Got back late Sunday night from the 2013 ProSolo held in Farmington, New Mexico.  Lots of firsts for this event.

Starting with the trip there – it was the first time I’d ever driven through a sandstorm.  Didn’t look too bad on approach, but turned out to be about 35 miles of 40-50mph winds 90 degrees to the road path. 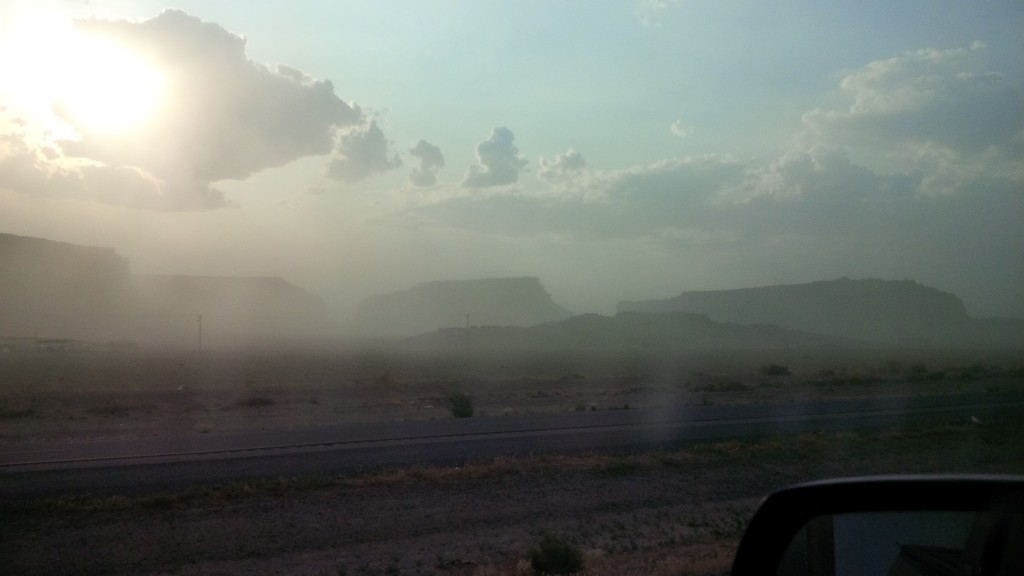 Truck and trailer took it like champs, and got a few pictures at a couple spots where things calmed down a bit. 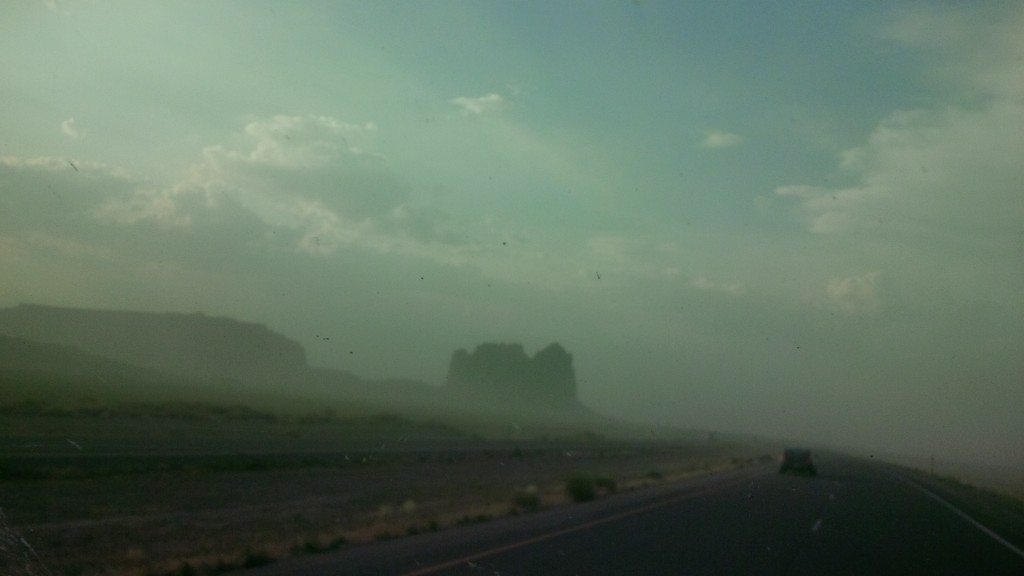 Unfortunately the winds blew open the rooftop vents on the trailer, causing a lot of dirt and sand to make it down onto the car. 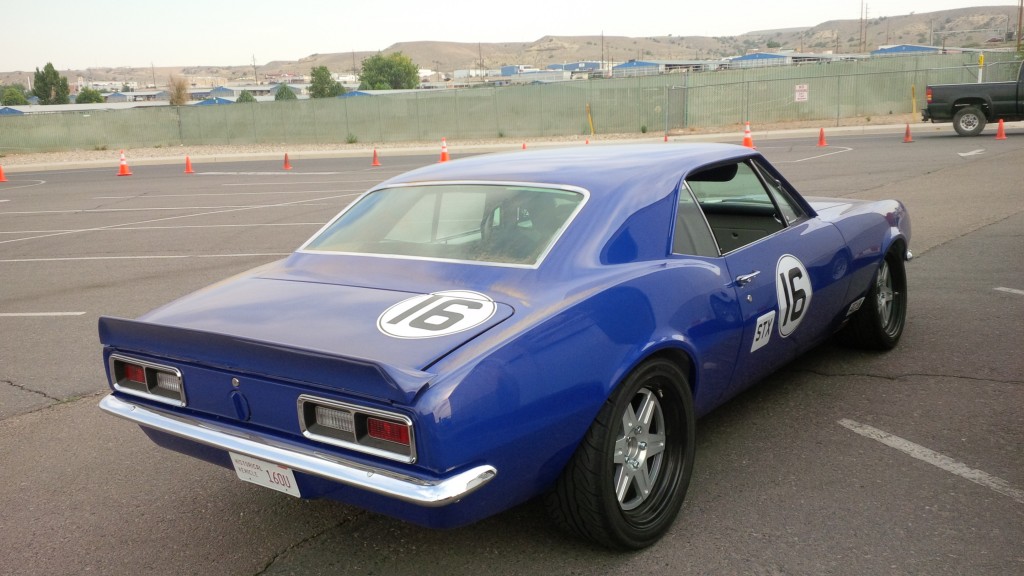 Yuck!  Dirtiest it’s ever been.  Fortunately the first few runs got a lot of the dirt knocked off.

To recap from previous events, the car arrived with new rear calipers to reduce rear bias,  a bunch more low speed bump damping in front, the rear lowered 1/2″, and a new ignition system.

All these changes were good ones, the car was much better than El Toro.

Another first, was in the reliability area – the car completed all three competition heats (two on Saturday, one on Sunday) without an issue.  I didn’t really need to do anything to it all weekend, and could focus on driving and getting a feel for the car.

For those not familiar with ProSolo, it involves a pair of courses constructed in mirror image.  Two drivers start from a drag race tree and complete their course, then cross over and run the other side.  In each heat you run each (left and right) course two times, for a total of six runs on each course each weekend.

After the first group of drivers ran Saturday morning, I had the quickest time on the right side course!  While that is just about the least meaningful thing one could hope to have accomplished in a ProSolo weekend, it felt like a pretty good start, especially since STX had a decent class with 9 entrants, many of whom are trophy contenders at Nationals in the class.

Of course once the second drivers ran thing returned to looking more bleak, especially with Steve O’Blenes’ fantastic performance on the left-side course. 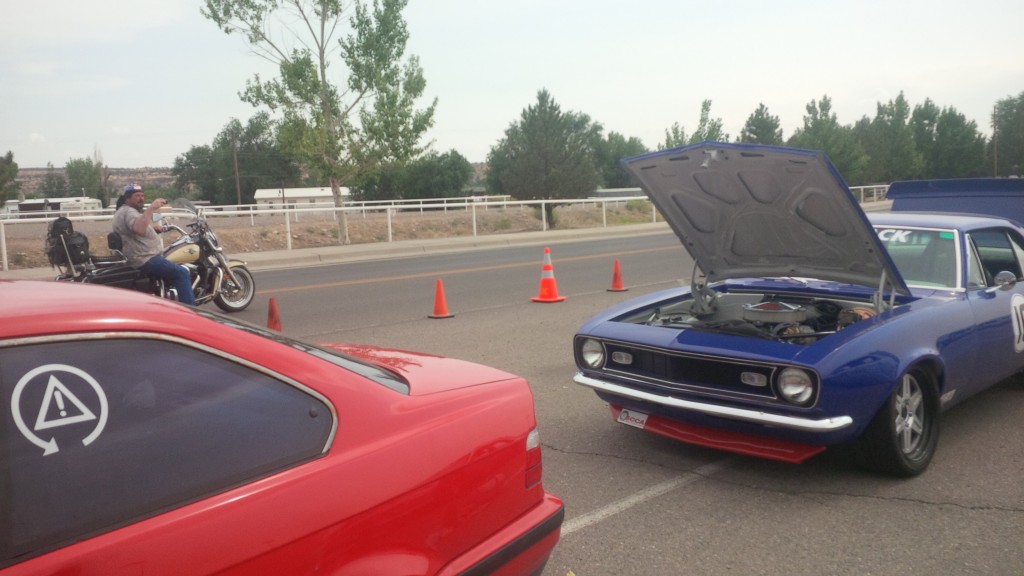 The town of Farmington is a lot like most small towns we autocrossers visit.  The people there aren’t accustomed to seeing fancy Corvettes and Vipers and old Camaros, and it was a kick to see them getting a kick out of our cars.  The grizzly biker above stopped in the traffic lane to take a cell phone pic while the car was in grid for Saturday afternoon’s runs.

The second set of runs went better, and the last right-side run in that heat was maybe the first halfway decent run I’d put together in the car.  It was still a ways off the pace (about .5 on a 36 second course) it only had a bunch of small mistakes, nothing major.

Received many nice observations from folks afterwards, the car seemed to be working better. The “your car appears to be working ok” compliments sounds similar to “your car looks cool” but are a lot more valuable, and this is the first time I’d heard anything like them for this car.

Sunday morning brought cooler weather and a chance to move up.  Here are two videos from the morning, my best clean left and right side runs.  Still a bunch of mistakes, and overall not very good driving – but that can be improved with practice.

Have some thoughts on the next round of tuning changes, will put those together in a future post.

This was a good solid weekend and a nice job by the region in putting on a solid event. A bit further than what was my favorite event of the year (Wendover) but Farmington served up some of the transit drama and pleasure Wendover was known for. 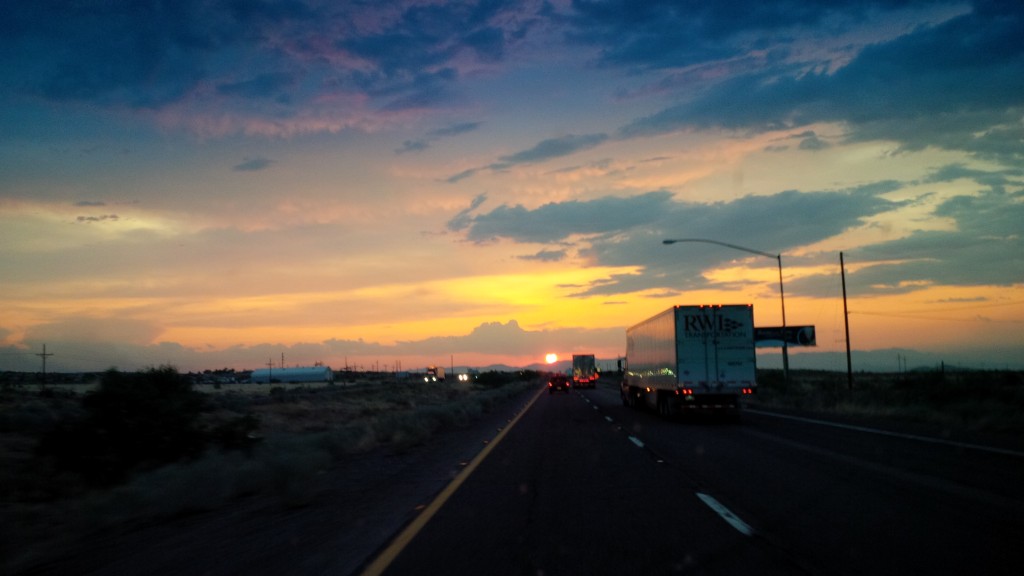