We get lots of cornering experience in everyday driving – 90 degree turns at street corners, long sweepers at our freeway onramps and offramps.  But transitions, most often in the form of a slalom, are a really rare animal, never encountered on public streets.   And even though the speeds are higher and the governing physics identical, the esses at a track like VIR, Infineon, or the Streets of Willow don’t deliver the frantic tension of a tough 8-cone slalom at the Solo national championships.

From our earlier analysis we found we spend about the same amount of time in transitions as we do in regular cornering (40% each).  In a lot of regions, or on a lot of courses, the proportion of time transitioning might be even higher.  Runway shaped lots tend to produce very transitional courses, and there’s been a trend over the last several years away from corners, and towards more transitions (often disguised as “Chicago boxes”, “walloms”, etc.).

Given the rarity of transitions, it is also a place that tends to really separate the great drivers from the good and average.  I’d wager more championships have been won – and lost – in slaloms, than in any other type of element.  We won’t be covering slalom driving techniques here, but we should keep in mind that they are of critical importance, and ensure we are at our best through them, though of course we’re always bound by the physics of our situation.

In a theoretical “perfect” slalom, the cones are evenly spaced in a straight line, forever.  We ignore the first and last 2-3 cones.  It’s in the middle of this “forever” slalom where we can isolate the maximum number of variables and focus on transitioning theory.  In this space, the car is traveling at a constant speed, in a sinusoidal pattern, instantly transitioning from one lateral cornering limit to the other.  The perfect driver executing this maneuver just touches the base of each cone, thus moving the car laterally only as much as was needed to not hit each cone.

There are a lot of factors that come into play in evaluating how a car will slalom…and fortunately for us all, the work has already been done.  As happens with a lot of neat scientific and mathematical endeavors, many of the variables end up canceling out, leaving us with a simple truth.  Since I don’t wish to plagiarize upon the work of those who’ve already done so, here is what was originally a post to an autocrossing email list, done in the days before the rise of the modern message board.

The slalom formula is:

When you solve for the formula you get a number that is typically around
1, which corresponds to the seconds to go from one cone to the next in a
forever, never-ending, consistently spaced slalom. In the real world we
can and do shortcut the first and last cones of slaloms, but the middle
cones are subject to this formula.

For instance, let’s take an autocross car that pulls 1g and is 5.5 feet
wide, going past a cone that is 1 foot wide at the base. This means

This formula was derived with invaluable help from (yep, you guessed it)
Jay Mitchell back around 1994 or so. I’ve tested it empirically for
years and still find that it holds water, no matter the size of the
vehicle (even dually pickups and Suburbans, down to shifter karts and
kid-karts), no matter the g-loads, no matter the distances (with the
above caveat not withstanding). This simple formula is a lot of fun and
very useful. In conjunction with a G-Cube you can use this formula to
compute how much you missed the cones by, for instance. And you can
certainly predict how fast a street car will slalom if you know it’s
width and have a good estimate of it’s lateral g limits.

Okay, I’m getting back to real work now. Lurk mode ON!

There’s a couple key variables here – d (the lateral distance we have to move the car, roughly equal to its width), and g (the lateral grip the car produces).

After having passed 5 cones, the narrower car has a 2 tenths of a second advantage.  Plenty of jackets have been won by less than this.  Plenty of courses out there where between the boxes and jogs and offsets in addition to regular slaloms, you’ve got to transition 20-30 times before the run is over.  It adds up. 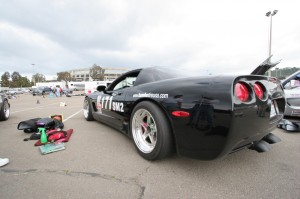 Wide cars look cool, but you pay the price at every transition!

One thing that helps mitigate this situation for the big car is the relationship between the car’s width, and its lateral grip limit.  In our above example,  the narrower and wider cars share the same lateral grip limit.  But what if you could take a car, and adjust its width? Widening a car by about 10% (66″->72.5″) will reduce weight transfer from inside to outside, by 10%.  That means a reduction of up to 5% less weight on the outside tires, putting them in a better part of the tire’s load sensitivity curve.  But how much better, and how much more grip will the car make?

It all depends on where the tires were before the width change.  If the tires were already really well off, it may not mean much – but if they’re badly overloaded (as the outside tires of production cars tend to be at peak cornering), it may help quite a bit.  The 5% less weight won’t mean a 5% increase in grip, but it could mean 1-2%, maybe 3% if we’re lucky…moving peak lateral grip from 1.2, to 1.22 or 1.23g.  Maybe more, maybe less.

A savings of one hundredth per cone, about 25% of the narrower car’s advantage.  Still losing 3 hundredths per cone, but at least it’s not as bad as it first seemed.

Also remember we still have to drive the car.  At 40-50mph, the cones go by awfully quick – passing 3″ closer to them than your competitor, can cut this disadvantage in half.

If you’ve got the wider car, you better hope it’s giving you an advantage in lateral grip, to mitigate the time you’re losing due to width, and to give an edge in the skidpad sections.  Having a wide car is manageable on a good Nationals-quality course, but can be about the most aggravating thing imaginable on a poorly executed local course full of narrow transitions.