Actually the Camaro’s brake bias was probably too far off to be fixable with a brake bias adjuster, so it’s getting a more powerful prescription:

In actuality, the pads don’t have far to go, and once they’ve hit the rotors, braking force has to do with the pressure exerted.  The principles of hydraulic systems dictate the pressure be equal everywhere, and force can be figured as pressure applied over an area – thus, the smaller the area, the less pressure applied to the brake pad.

Hopefully that equates to less death-rotation under braking 🙂

Like the look and finish of these better anyway, they match the 6-piston fronts.

Why people use steering lock limiters

In it, the car is at heavy left steering lock.

In putting around before that event, I’d found with the camber, caster, and wheel spacer dimensions, I could get just less than 1.5 turns of the steering wheel, before stuff would start rubbing in the fenderwells.

I’d even noted where the rubbing was happening (wheels on the forward portion of the upper control arms) and filed the area down a little bit, figuring that’d be the worst it would get.

But then the almost-spin happened.  Caught me by surprise – as, well, just about everything with the car still does.  The Yokohamas don’t seem to make any sound when they are locked up, and on the San Diego surface, they didn’t seem to really make any visible smoke either.

In the save I forgot about the self-imposed steering limit of just over one turn (which I remembered in my spin the following weekend at El Toro) and turned the wheel as far as I could to the left.

Saved the spin but the results of having done so on the right front upper control arm are here: 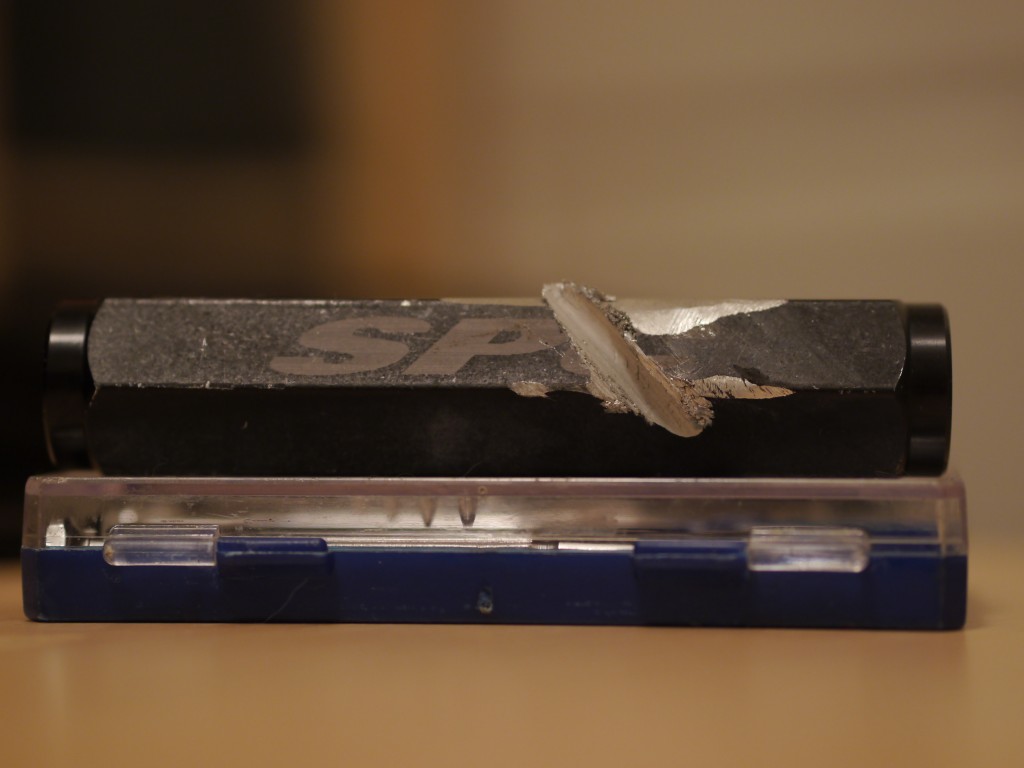 The inner lip of the wheel rubbed right through the aluminum in the arm, almost into the threaded section.  If you get the high-res pic where it just about goes through in the low points of the inner threaded barrel.

Have a new piece in there now, and the other side is ok, will have to be more careful in the future.  This does highlight a nice aspect of modular arms, and of modular parts in general – instead of having to replace the whole arm, only had to replace a $19 piece, which only took a few minutes.