This Jerry guy knows a lot about these cars.  He’s been playing with them since before I was born and in doing so has amassed a pretty crazy knowledge base.  Jerry is to Camaros as famed autocrosser Andy Hollis is to the Honda Civic/CRX.

A couple things from Jerry showed up today.  First was his book, 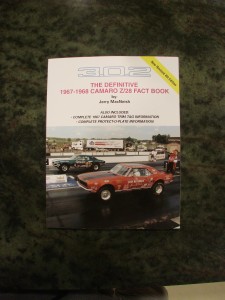 Lots of good details, all Z28 specific, will help ensure I get all the little brackets and details correct.  Also confirmed (positively, yay!) a lingering gearing availability question I had.

Link to his books – http://www.z28camaro.com/publications.html

While you’re there, check out this car:

There’s no shortage of myth and legend of what these cars could do from the factory down the quarter mile.  Some say they dogged off the line and couldn’t break 15 seconds in the quarter.  Others brag of running 10’s with slicks and headers.  Any time you hear stories like this, reality probably lies somewhere between.  Jerry’s numbers on that page are pretty good on a car with only a couple little ST-ish things done from the factory.  This STX car when done should make a little more power and weigh a good 200 pounds less.  🙂

The other thing in the box was an original mint-condition intake manifold for the car.  It was supposed to go straight to the engine builder but what the heck, this gives me a chance to photograph it before the motor is all put together. 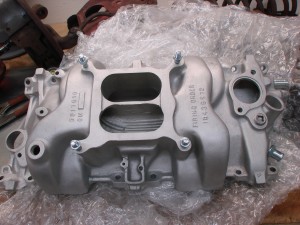 Can’t wait to be done with all the dirty scummy parts, and start putting together the nice clean new stuff.

Up at 5am today, hit the airport for 6:40 Southwest 119 to Sacramento with perfect timing.  Caused a stir at the bank by trying to withdraw my own money (?), paid the fellow and left in this- 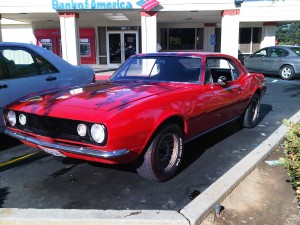 Yes, that is a red/orange overspray on the left front tire.  Fellow was doing a quick fix-up and sell, and got a little rambunctious with the paint gun – the windows, engine compartment, license plates, door handles, radiator, etc., all got paint on them.  No big deal as most of those things will be replaced or repainted anyway.

So with no speedo and no gas gauge I set off from Sacramento towards San Diego around 9:30am.  Car has a V8 out of an ’84 Camaro with an Edelbrock carb.  Transmission is a 4-speed, Muncie we think.  It’s not too whiny and first seems a little tall and close to second, so I’m hoping it’s an M21.  Rear end is a 10-bolt but very steep, thinking probably a 4.10.

With this setup I’m expecting 13-14mpg, even at the guesstimated 55mph I’m traveling.  Car had about 30 miles since last fill-up, so I stop about 40 miles in to gauge consumption.  Never filled up one of these wacky rear-fill things before, the lack of evaporative emissions  gear readily apparent.  At about 3.2 gallons, fuel starts spilling out all over the back bumper.  That’s odd.  The fellow mentioned it leaks a little bit and to hold it tight, so I do, but after about 3.5 gallons, everything I dispense splashes on the ground.  Hmmm…

Make it another 110 miles, and I can only fit in 5.2.  It is a new tank and the owner said something about the level and rake in the car, so I turn it around on a slight slope, and still can’t fit any more in the tank…

(Can you see where this is going yet?) 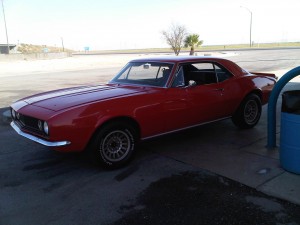 The darn thing got 20-24mpg for every leg of the trip.  I still stopped every 110-130 miles to be safe, but I never fit in much over 5 gallons.  Since I was going to be taking the car apart at home and didn’t want too much gas in it, for the last leg went from the south side of the grapevine, all the way home, about 150 miles.

Definitely plan to get a functional gas gauge going!

So…how was the car on its first drive?

It has manual everything – steering, brakes, etc.  The steering ratio feels like it’s 99:1 in parking lots – takes 2 turns to do anything and it’s still heavy.  There’s about 1/8th turn of dead spot in the middle, monkeying around with 1/8th turn in the Viper would get you spinning.

The brakes are phenomenally…atrocious.  Manual drums at all four corners.  The worst brakes of any car I have ever driven.  There was a little pull to the left but I have to imagine they probably aren’t much worse than when the car was new.  Scary stuff!

Speaking of scary, there were no seatbelts in the car.  It had seats from the ’84 Camaro, must have lost the belts in the translation.  I’m a big believer in seat belts and always wear mine – their absence is part of why I’m going right to work on this thing instead of tooling around with it for a bit.

Side window vents rock!  They did a great job of making window-down a comfortable and quiet thing.

The engine was pretty weak and sounded like it was full of exhaust leaks.  The gas pedal required huge force to press, that got really annoying.  Not going to miss this motor.

Used the transmission/engine to help deceleration on offramps.  It would pop out of third gear under decel.  Looks like the trans will for sure need a rebuild if kept.

Got home around 8:15pm, tired, but excited to actually check out the car.  Had been in “get it and get it home” mode all day.

Couple scary things – one missing and  one half-off lugnut on right front.  Other corners have all five.  Camaro Berlinetta 14″ wheels have too much offset for this suspension, the lower steering ball joint was rubbing the tires the whole way home.

The wiring is a complete disaster, stuff going everywhere, lying on hot parts, tangled in steering, you name it.  Will have to be completely redone.

The thing is SOLID!  No signs of rust anywhere with some extensive magnet testing.  Looked underneath, the original factory bump stops are there, all the suspension appears unmodified.  It even has the original sound deadening under the carpet.  This is a great place to start for an STX car, as so much of the original stuff is still there, and I won’t be stuck with the car in “paint/body jail” for 6 months.  At least, I hope not. 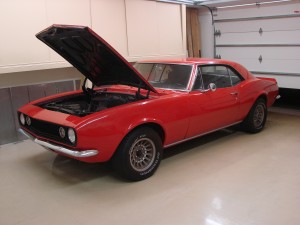 Starting working on a plan of sorts for the build sequence.  Most steps involve wrenching on the car.  No problem, I’ve done a lot of work on cars over the years, and have a good assortment of ratchets, extensions, and wrenches, from 6mm all the way up to some 30+mm axle nut sockets.

Wait, mm?  This is an American car built in the ’60s.  Before we’d been to the moon.   Before we were using metric fasteners on our cars.  Stopped by Sears while out today for some good-old fraction-based sockets and wrenches. 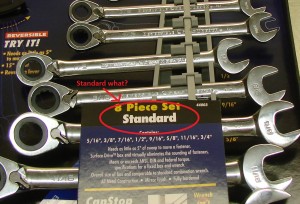 The Craigslist ad to start it all…

After scouring eBay, half a dozen online classifieds, and manually combing through every region’s Craiglist from Nebraska to San Diego, finally came across a decent looking car at a good price.

Some cute mis-spellings.  “Solid car” sounds good.  Rust free sounds optimistic, but I can check the carfax, and if the car really has lived its whole life in CA, it should at least be minimal.  Nice older gentleman owner says car was originally a 327 with 3-speed floor shift, but now has a V8 out of an ’84 Camaro, with a 4-speed Muncie.  Says it’s totally daily-driveable.  Looks like I may need to replace the wiring with a new factory harness, but that’s not too bad as there’s not much to these cars and it’ll be stripped down to the shell anyway.  He says it hasn’t been restored, hoping to find most of the original things like sound deadening, intact.

Going to get the VIN tomorrow and if it looks good, fly up to Sacramento next week and drive it home to San Diego.  Did a similar trip with my 240sx in 2005, though that trip took me to Portland!