Small-block Chevys with headers is the automotive equivalent of a peanut-butter sandwich with jelly – once you have the first thing, you have to try having it with the second.  I’d bet anyone, that more headers have been designed, built, and sold for the ubiquitous SBC, than any other engine in history, and likely, for any engine that ever will be made.  So choosing headers for the car should be a slam dunk right?  😉

Given the popularity and huge run of the SBC, there are a staggering number of choices out there.  And amongst those choices, pretty much all are available to fit in a Camaro – which, for the most part, has plenty of room for headers of any design.

The most common design is a 4-1 long-tube style, usually with primaries about 30″ in length.  Among the best of this breed are Stahl headers – these:

are built off the same jig used to make the headers used on the Penske/Donohue road race cars from ’68 and ’69.  Great ground clearance, with a race-proven design.  Fits the theme too…so a good choice?

Since the primary use of cars like Camaros from 1970 until recently has been drag racing, most of the brand names you think of (Hooker, Hedman, etc.) designed their headers with drag racers in mind.  Drag racers don’t tend to run their cars as low as road racers, so they’re less concerned about ground clearance, and low weight.  Most headers you find for this crowd are a heavy-ish gauge steel, with a crummy high-temp coating, and hang down 2″ or more below the frame of the car.

One trait drag racers and road racers have in common, is a focus on the top end of the powerband.  As a vast generalization, the common 4-1 design SBC header promotes maximum peak horsepower, and the primary tube diameter (1 3/4″) and collector size (3″) most often offered, is really bigger than needed for a typical SBC in most uses.  In my case with a 302 (at the small end of SBC displacement) and a focus on midrange (this is an autocross car after all!) – the vast majority of the headers out there just weren’t the right fit for the application, at least not as I see it today – including Stahl’s headers above.

Based on this, I took a plunge on an off-the shelf header that *should* meet these requirements.  As with the shifter in the previous post, things aren’t quite right out of the box – the passenger side header needs to be bent downward a bit at the rear, to keep from hitting the floorboard. Might just cut off the triangle flange and go with a v-band, haven’t decided yet. Driver side fits perfectly. 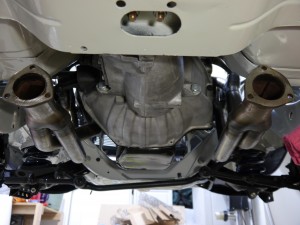 Instead of a 4-1, it’s a “tri-y” design, also known as 4-2-1.  It’s not stainless, but is a thin-wall mild steel, the units are quite light.  Primaries are 1 5/8″, and collectors are 2.5″.   Those are good conservative starting values, similar to what was used on the engine dyno, though the dyno headers were 4-1.   The purpose of the test fitting was to make sure they’d fit the car and its components, before being sent off to Swaintech for their White Lightning coating to be coated inside and out.  This stuff is extremely effective at keeping the heat in, I had used it years ago for the turbo components when I took my 240sx to Street Modified: 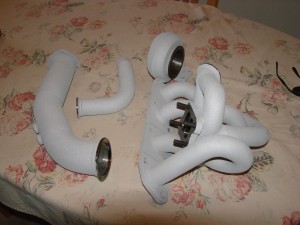 This should really help keep the interior heat levels under control.  A lot of the restomod/Pro-Touring guys add a hundred pounds of sound and thermal insulation to their cars…definitely not a fan of that approach for a car with heavily sporting intent.  Will probably be doing Swain on the rest of the exhaust system (which itself is still somewhat TBD) to help keep the floor cooler.

From inside the engine compartment, passenger side- 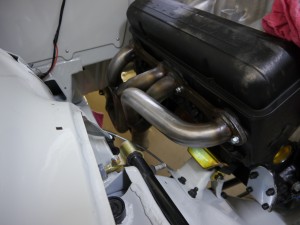 Not much going on over there, especially with no heater.  The Swain will help keep the starter from getting cooked, and not working on a hot engine on a hot day.

Driver’s side is a lot more cramped, but they fit well, with at least ~3/8″ clearance to the other hard parts.  Again, counting on the Swain coating to help keep the PS fluid from boiling, or other things from melting. 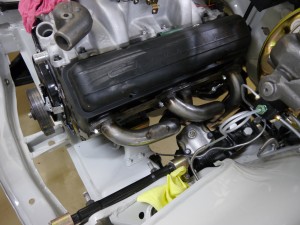 Ground clearance – not perfect, but close to it, for this car.  The larger diameter things have a harder time staying tucked up like this. 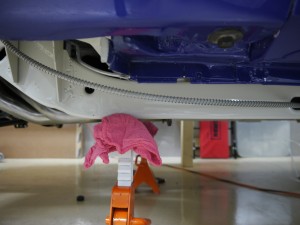 If I end up with the nice-to-have problem of too much low-end and midrange torque, such that throttle modulation is impossible and the 265 street tires are constantly being blown away… then I might consider going to a more top-end-centric header design, as an archaic sort of traction control.  Or, if the power feels lacking somewhere, having someone like Burns Stainless design and build a custom super-thin stainless set of headers based on all the engine parameters, with a focus on beefing up the spot of the powerband that feels lacking.

I’m hoping the SBC have been around long enough, the unit I have is an effective design, taking into consideration its apparent goal of being a good “street” header.  I had Burns do a full workup years ago for my 240sx when it was in STS (stock engine, normally aspirated) and the tubing diameters and lengths their software spit out, were pretty much exactly what DC Sports had put together in their cheap off-the-shelf unit.

Now that I’m confident these things are going to fit, placed an order for the rest of what needs to go under the hood.  Hope to get the flow of updates coming more regularly soon. 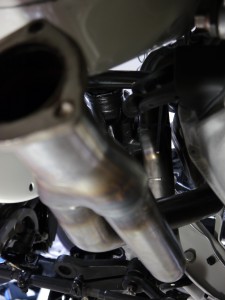 Car came with a hole in the trans tunnel from a prior modification, patched with some screwed-in metal I removed in tear-down.  Here’s a dark photo illustrating the size of the wound: 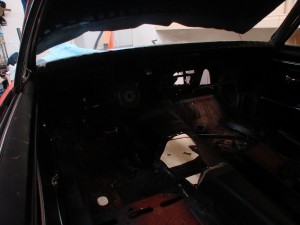 It’s all been repaired since, had new equal-gauge metal welded in and smoothed when at the body shop: 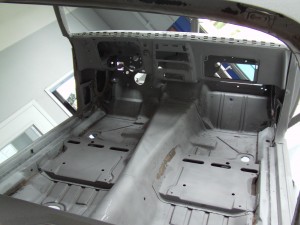 But as I went to install the Hurst Competition Plus shifter on the freshly rebuilt trans, I realized there was no freakin’ way it was going to fit, without re-creating a monster hole.  After some investigation, turns out I had the wrong shifter – even though it worked fine with the trans, it was meant to fit in a Chevelle, which has a big hump on the driver side of the tunnel to accommodate that type of shifter.

So, a brand new Hurst Competition Plus shifter – this time for the Camaro, was purchased and installed- 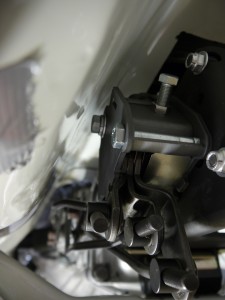 No holes were cut in the installation, though it was a bit of a pain, you can barely get it in there.

As you can somewhat see in the picture above and this one below: 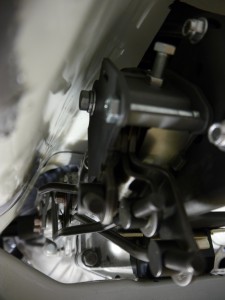 The shifter works on the transmission through a collection of rods – one for 1-2, one for 3-4, and another for reverse.  The instructions say the rods may need some bending to “fit your application”.  Turns out they’re right about that – they all need bending.  Got the 3-4 rod bent now so it’s not hitting the trans tunnel, but the reverse rod hits the 1-2 rod when you use it, causing the transmission to select second gear and reverse simultaneously!  (Not so good when adjusting your position on the line at a Pro Solo with mere seconds left, and the trans gets stuck like that!)

So, still some more bending to do – looks like there’s plenty of room to get everything to work with no interference, just needs a bit more time and persuasion.  It’s funny to me, how a shifter design that literally must be 50 years old – one that probably still sells well today – still just plain doesn’t work right out of the box without some tweaking.

Would like to take the rods apart again anyway – noticed the Chevelle-style shifter had steel bushings in the ends of the rods, whereas the new ones are nylon, which might dampen a little vibration, but also might break.

Shifter is a medium height, a decent starting point.  Hurst makes a bunch of different shifter sticks, if I’d like it up higher (closer to the steering wheel) they make longer ones, and if I’d like a shorter throw, they make shorter ones. 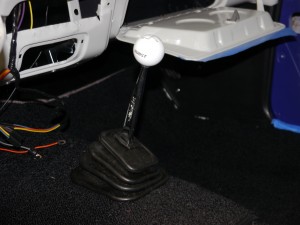