Not the most exciting thing but did get the spark plug wires all put together – cut to custom length with proper terminal ends. 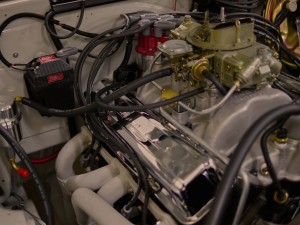 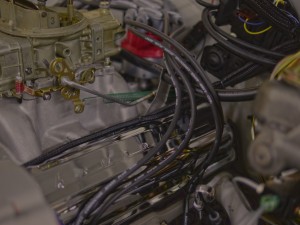 Chock this one up as another oopsie-

The BMR subframe connectors appeared to be, and mostly were, a straightforward installation.  Had John Coffey add a third attachment point to make them even better than off the shelf, and had them painted to match the underside of the car.  They became the bitching-est bolt-in SFC’s ever assembled.

One problem surfaced later though – the way they mount, interferes with the stock routing for the fuel and brake hard lines.

This wasn’t immediately obvious, and I figured the difficulty I was having in getting those lines cleanly run (when provided with pre-bent stock replacement lines) was a figment of my own moronity.

Turns out it was, but not in the way expected.  These SFC’s interfere with the way those hard lines are run by the factory, and my interpretation of the rules (“No alteration to the OE components is permitted.”), does not allow me to alter them to fit subframe connectors.

So the 24lbs. of “Non-Terminal Steelitis” the car came down with 2 years ago, has for now anyway, been cured.

Pulling the SFCs wasn’t too bad but the fuel and brake hard lines will have to be re-done, which is a bunch of work.  Ugg.

Last night I couldn’t really let the car run since it was so late.

Had a few minutes tonight, was able to get the distributor clocked to a more idle-friendly position and re-fire. 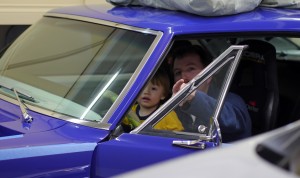 With my little helper, was able to get the car idling halfway decent, and later took a video of it running

Will have to wait to the weekend to get base timing set.  So far it looks good, no leaks!

Bringing a little CP to STX 🙂

Spent every spare moment I had today on this thing, and at last, it runs!

Much of today’s work was in mounting and wiring the ignition coil, which we are allowed to replace in ST. 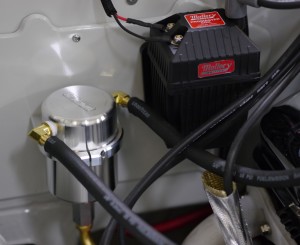 Since the car is heater delete, the heater blanking panel makes a nice convenient spot for mounting both the coil and the Moroso catch can, without making any new holes in the firewall – which after 46 years, has seen a bit of tinkering.

Stock/ST also allow for catch cans, so long as factory PCV/emissions functionality is retained.  In this case, the “input” to the can is from the PCV valve, while the “output” goes to the vacuum port on the carburetor.  For those not familiar with catch cans, the idea is to have something that captures the misty oil vapors that escape a PCV system under load, and separate out the oil from the air.  Any oil consumed by the engine will combust, but it does so at a lower temperature than gasoline, and can lead to detonation/preignition.  This is bad on a normal engine, even worse on a high compression engine like this 302, and extremely bad on a forced-induction car.

With the catch an in place, the oily mist is turned into regular oil, which can be emptied out when needed.  The engine continues to enjoy a functional PCV system, but through it, only ingests clean air.

The remainder of the work was spent under the dash, getting the DL1 and DASH2 all wired up and talking.  Still figuring out the exact song-and-dance needed to get the DASH and DL1 to talk properly, was able to get what I wanted after some effort, but there is probably an easier way. 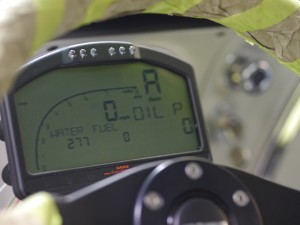 With the plugs out, verified the motor made oil pressure just using the starter, and that the sender/dash combo reflected the pressure.  Still haven’t wired in the fuel gauge or coolant temp sensors, hence their bogus readings.

Later, put the plugs in and ran the spark plug wires.  The MSD wires I have are all wrong, will need to get different ones, and route them more carefully.  But at 9:09PM, it started and ran!  Since the 20 month old was just getting to sleep I shut it off right away.

Still lots to do, but this was a gratifying step, and I met my goal to “have it running by New Year’s” – even if it was New Year’s day.  🙂