Turning over some new leafs

Most people think of a leaf spring suspension as a drawback, and in many ways it is, but I also find it one of the more interesting challenges in developing the car.

The original composite leaf springs for the Camaro had it way too high – might be ok for a stock-height car, at a much-heavier-than-stock rear weight (which my car is not) – so, about 3″ too high, even with a 1″ spacer block.

The next set, what’s on the car now, was better – the lowest ride height Camaro design Flex-a-Form makes.  They require only about a 1.5″ spring spacer to get the height correct.

Unfortunately while spacer blocks are an easy way to get ride height where you want it, the more you use, the more they detract from the leaf spring’s ability to control the axle.  I already saw in San Diego (and at El Toro for the 1 run where the car was launched with full power) that these leaf springs could not adequately control the axle as installed.

One solution is to install a torque arm system.  These are big beefy (Steelitis anyone?) members that rigidly connect to the axle housing, and run forward, up to a crossmember by the transmission, which manage axle wind-up under acceleration and braking.  Big, heavy, and difficult to implement legally under ST allowances – things to be avoided if possible.

So instead of a torque arm, trying instead to manage the situation better, with a new set of leaf springs.  There’s a couple aspects of spring design that can help.

One is to make them flatter, to enable the use of less spacer block.  Since Flex-a-Form had already made their lowest possible ones on their regular Camaro die, they had to try something else, which was the use of a different die, used for transverse Corvette springs.  This produced a flatter spring, though in looking at it next to one of the original Hypercoils, am not sure it is flat enough.  Will have to get these on the car, to see how much spacer block is needed – hopefully little to none.

The other thing, was I had them make the forward section of the leaf up through the spring mount area, extra thick, while thinning it out in the rear section.  The middle and forward section of the spring are the portions most responsible for longitudinal location and managing axle wind-up, so some extra beefiness there should bolster those strengths, while the thinner rear section keeps the overall spring rate in the right range (approx. 250lbs/in. for now).

By this time had planned to have completed 3 more events in the Camaro – Porsche Club of America (PCA) autocross May 26, then the “Spring Nationals” ProSolo and National Tour in Lincoln, NE over Memorial Day weekend.  Unfortunately, didn’t make any of them.

Plan was to run the PCA event just to make the car was sorted enough to justify the (very long) journey to Nebraska – over 1600 miles each way from San Diego.  Unfortunately, some events at work conspired to necessitate canceling the Nebraska trip.

Then the PCA event was a bust too.  All the tuning plans from after ProSolo were completed -the new rear brakes were installed (bonus of an even firmer brake pedal), the front shocks were re-valved and reinstalled, and a new ignition system was installed.  Also did an oil and filter change (what a mess!) and lowered the rear ride height 1/2″, and adjusted pinion angle further down (to provide a little more pinion yoke <-> driveshaft tunnel clearance).

Unfortunately the ignition part didn’t happen until the day before the PCA event, and was done somewhat hurriedly.  Still, the car fired up the first time, and it seemed healthy as ever.  The Mallory stuff was all jettisoned for new Crane Cams gear.  Plan was to get it through tech, then use some of the otherwise unoccupied time during the day, to button up the wiring.

Got up to El Toro, and the car fired right up on the trailer – pulled it off, and while warming up, adjusted the numbers for the event.   Took off through the paddock to get to tech…car feels wonderful, crisper than ever…and … it dies halfway there.  Won’t restart.

Some helpful guys help me get it pushed back to my paddock spot, and work commences.  Unfortunately the time to get through tech has just expired, so the chances of getting to run are pretty much toast.

Work on things for a bit – I’m convinced it’s something in the ignition, but am not sure what.  Try re-wiring all kinds of things, supplying separate power, setting the timing all over…nothing.

Eventually I give up, and the same helpful folks, help me get it pushed on the trailer.  It’s a shame the most common question these days isn’t about the engine or suspension, but instead “where should we put our hands to push?”.

Car sat for a while, but had a chance to take a fresh look at it today.  Pulled the distributor cap, and as it came off, could hear the sounds of metal bits tinkling down onto the trailer floor.  Hmm. 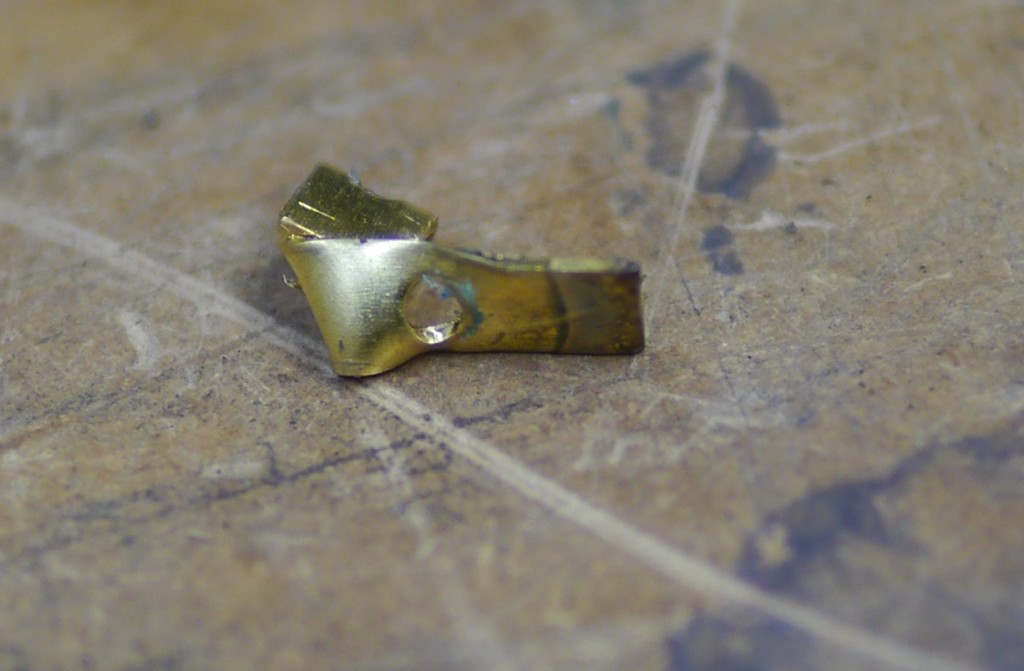 Pull the whole distributor out since it’s hard to see back there, and find the above piece wedged in the optical pickup.

The below picture tells the tale – on the left is a brand-new rotor I’d bought for a future tune-up; on the right is the rotor as it sits.

Notice the metal tang is gone, as is the piece that holds it down.  The replacement rotor is of a slightly different design, perhaps other people had this issue with this design rotor. 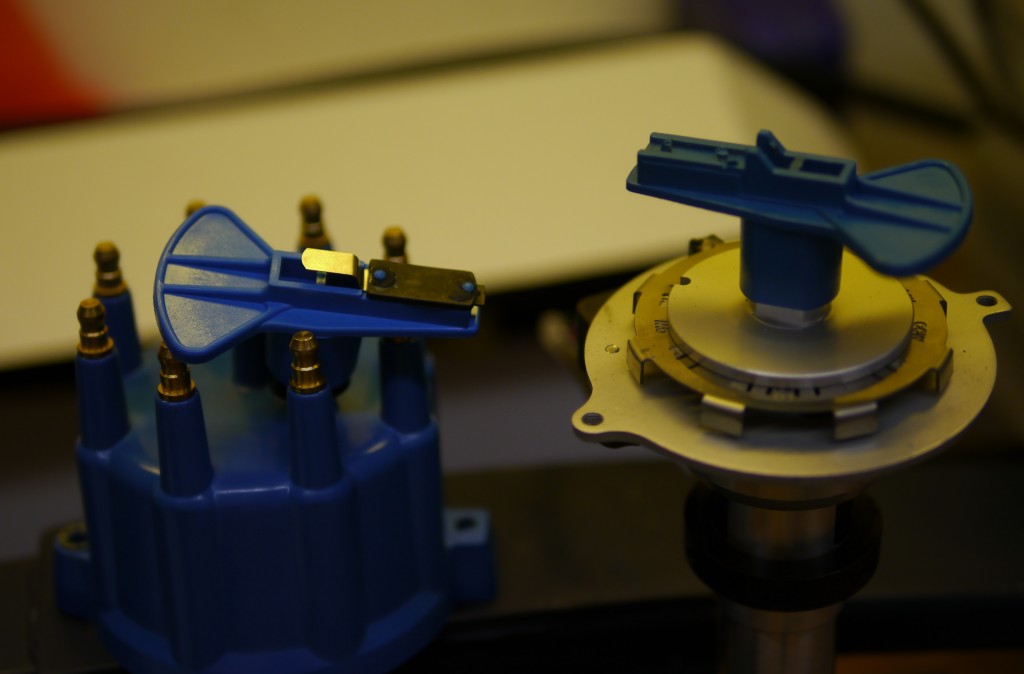 The first picture above is the center tang’s remnant, after I pulled it out from being wedged in the optics.  Optics, which are now toast: 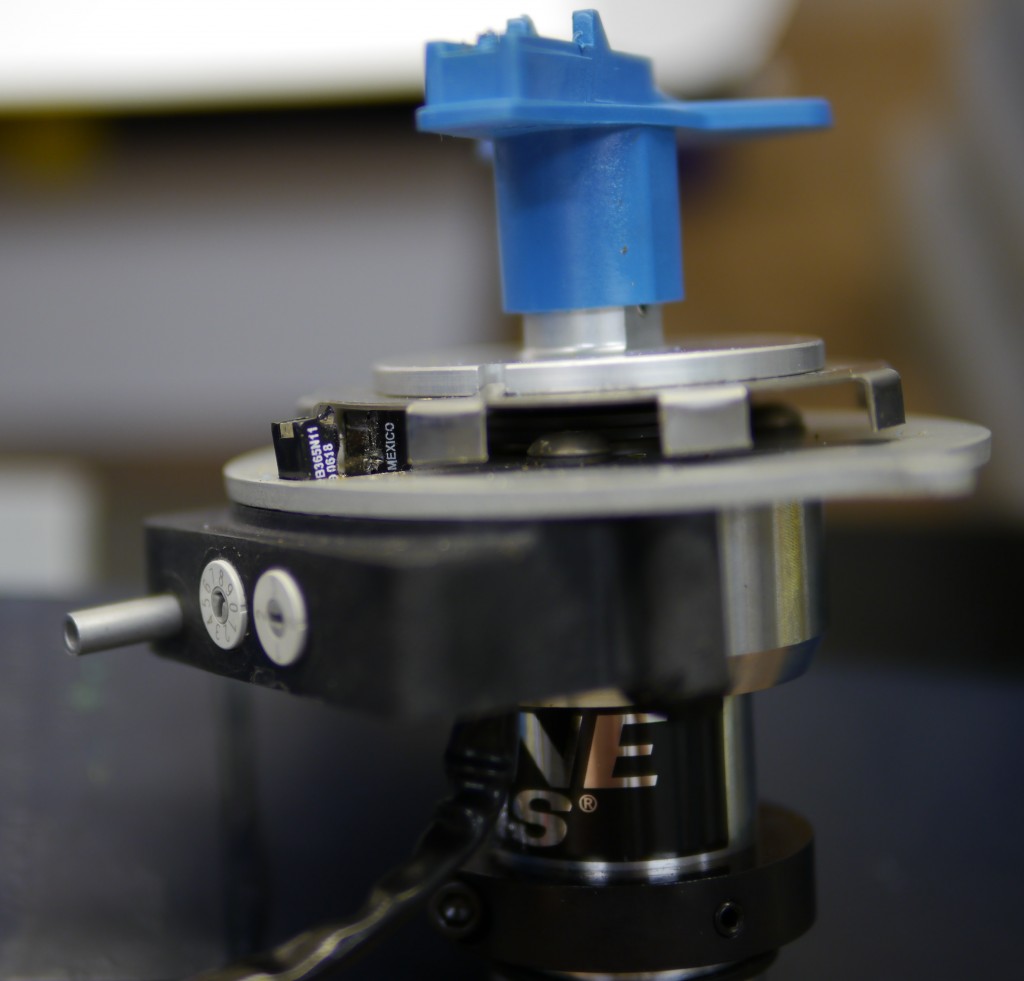 Just bizarre how much bad luck I’ve been having in the ignition department.  The cap was on tight and looked fine, not sure how this could have been due to an installation error.

Next distributor is another Crane Cams piece, the same unit they use in NASCAR.  Those cars don’t fail that often due to ignition problems from what I’ve seen…hopefully it proves more reliable, and I’ll always be traveling with at least one spare.

Very bummed I wasn’t able to run the PCA event – first event, the car was a complete handling disaster, second event the car barely ran and the handling was still way off – the handling should be much better now, if I can get it to run reliably 🙂