Took some time in an effort to address some of the issues identified after Nationals last year.  Despite the awful front suspension, my biggest problems centered around the rear of the car.  The back end was skittish, never planted, and despite the stiff springs, axle wind-up was still a problem.  In reviewing lots of video, the car basically never pushed, and there were frequent mid-corner corrections anytime there was a bump.

I sought to lower the car, make the rear more compliant, shift balance towards understeer, and improve axle wind-up if possible.

Review from before a set of Global West’s most race-oriented leafs, alongside some composites I’d had made. 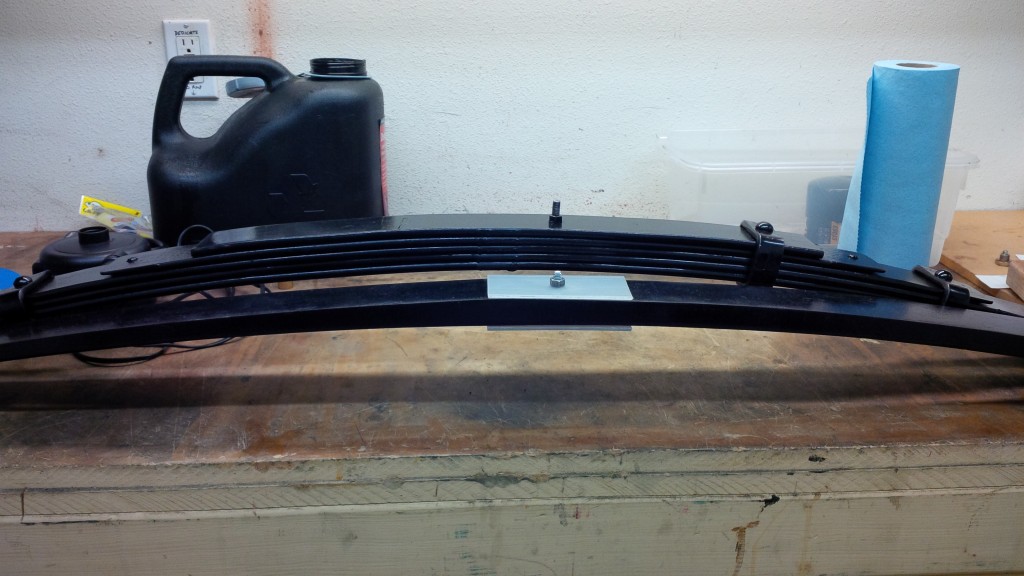 The G-W springs were a classic 5 steel leaf pack – the pair is at least 50 pounds heavier (+50) than the composites…probably more like 60-70 pounds.  They were also way too high – even with spacer block, the composites were too high.  The composite maker couldn’t make them any lower.  The problem is, I needed a leaf spring that was about flat at ride height – but the materials used in the lay-up of the composite leaf springs expect to always be in either tension or compression, and as the spring passes flat, things go the “other way”, which would damage the spring.

An advantage of the heavy steel leafs is they can have their shape changed – so that’s what I did.  Found a place in town that dealt exclusively in leaf springs (thank goodness for the Camaro, trucks still use them!)  and had the leaf packs de-arched by 2″.  For starters with this pack I also took the smallest two leafs out, which should reduce the rate somewhat – I estimate these are about 180lb/in., where the composites were more like 250 (-70).

You’d think changing these would be easy – four bolts in front, four bolts in the middle, two in the back, and they’re all pretty accessible.  But of course it wasn’t, took many evenings of thrashing and effort to get it put together right.

While I was at it, also took the opportunity to measure rear shock gas pressure, hadn’t done that yet.  Found this handy gauge to help- http://www.rjracecars.com/Shock-Pressure-Gauge-214308-Prodview.html

Shock gas pressure has a number of effects on the shock’s behavior.  It can act mildly like a spring, and can impact the damping forces.  In further looking to “stick” the back end of the car, I reduced gas pressure from 150 (where it was) to 100 (-50).

End result looks pretty good though, rear ride height has been reduced by an inch and a half (-1.5).

Lowering the rear also lowers rear roll center, to about where other live-axle experts say it should be.

So, to sum up the changes:

Plus it looks better now!

Some firsts today, and CAM

Been a long time without an update – hasn’t been much to report, but there are a couple developments worth mentioning.

This weekend was the San Diego National Tour, approximately the first anniversary of the car’s first autocross.  As mentioned in the previous post, the car has been moved to STU where it is hopelessly outgunned, so I won’t be running it Nationally this season.  Instead, for this year’s SD Tour I co-drove with Gary Thomason in his killer 2008 Viper, same car I ran with him at the 2012 National Champsionships-

The car is a lot of fun – the handling is right about where my black Viper was when I sold it (still miss that car!), but his has even more power, which is always a good thing :).  Despite have a lot more power than the Camaro, the Viper is actually much easier to drive, because it has race tires, the chassis puts power down very well, and the gearing is very tall…then there’s the ABS when it’s time to slow it down.

On Saturday of the Tour I saw several nice musclecars present as part of the SCCA’s new CAM class.  The attendance wasn’t great, but considering the relatively steep entry fee for a Tour (>$100), and there being a Goodguys event that same weekend in town, the turnout wasn’t bad.  This inspired me to commute down in the Camaro on Sunday.  I try to drive the Camaro around at least once per month, and it was due…

With the optional 4.88 final drive ration, 60mph worked out to about 4000rpm – which is a very high rpm for cruise in a small block chevy.  And that was with the >27″ tall “vintage” wheel/tire setup I have, first put on the car back in November 2012, but never driven on, until today.

The taller tires effectively lengthen the gearing – on the regular autocross setup, 4000rpm would have been more like 55mph!  This was the car’s first time on the freeway since the day I drove it home from Sacramento.  Fortunately other than some sore eardrums, the car made the 20-miles-each-way journey just fine.  The drive home was actually quite warm (~80)and I was impressed by how well the car’s flow-through ventilation system worked.

After more off-season thought I had been thinking about lengthening the gearing as a means not only of extending the 2nd gear top speed, but of extending the engine’s (especially the valvetrain’s!) life.  Today’s freeway drive reinforced that line of thinking.  Also, that the sidepipes have got to go, for something that exists back behind the car.

Over the past several years, multiple series of successful non-SCCA-related “Pro-Touring” focused automotive performance events have arisen.  Pro-Touring has no agreed upon definition, but most would agree it is something like “Classic American cars set up to turn and stop, in addition to go straight – while retaining streetability.  A Pro-Touring car delivers the performance capability and civility of a modern sports car, with the cool of a classic.”

Some of these events have been very low speed autocrosses in tiny lots, where the car show is the focus, but others have had timed high-speed track sessions as part of the curriculum.  Most of the people attending these events are learning to turn corners for the first time, but there are a few skilled veterans that have partaken in the movement also.

IMO, a few years later than they should have, and since my last post, the SCCA took notice of this trend, and created “Classic American Muscle”, or CAM.  In CAM, which is an experimental provisional regional-only class for 2014, any American car weighing 3000lbs. on 200TW street tires is legal, so that would include my Camaro with a full tank of gas and its heavy battery.

When creating something this new – where you’re trying to ensnare a big pool of potential new club members – there are a variety of approaches that can be taken, along what one might call a “spectrum of inclusivity”.  At one end of this spectrum would be an approach where the class starts off with a well thought-out and thorough ruleset, designed to eliminate years of obvious pending takebacks.  This would probably look a little bit like a mix of our existing CP, SM, and XP allowances, where aero is restricted, some body/chassis dimensions can’t be changed, some roadgoing equipment must be retained, and there are limits on tire/wheel size, as well as resulting vehicle balance.  Unfortunately this approach is also the least inclusive option on this spectrum.

At the other end of the spectrum is maximal inclusion – which means letting just about everybody in, which means you can’t bother people with any rules that would make them illegal.  This is the approach the SCCA took.

If this approach gets a lot of people signed up and paying SCCA dues, creating lifelong members and participants (in their P-T car or not), then it will have succeeded.  The part I worry about isn’t the early honeymoon phase, it’s later on down the road when it’s time to try to mold it into something that isn’t totally unlimited, without angering and losing the people you’ve worked so hard to attract.  The unlimited nature of CAM feels like a trick the SCCA is playing on the average, naive-to-racing-rulesets P-T type, which I hope doesn’t have the affect of turning SCCA-neutral people into SCCA haters.

So what’s so wrong with CAM as it sits today?  Well, let’s start with my car, which works OK for what it is – what would I need to do to prep for CAM?

IRS?  On a classic musclecar?

That picture I took yesterday – it’s an Art Morrison IRS at the left rear corner of Mary Pozzi’s 2nd Gen Camaro, the one that’s been made immortal by its video game fame.

But we aren’t done yet!

At that point you have a decent starting point for a Camaro CAM car.

The problem still is, the wheelbase is too long, and the car too wide.  So start all over with a Vega or Pinto or Fiesta or whatever other tiny little horrible car no P-T person actually wants.

Then, start over again like you’re building an AMod car, that somehow incorporates part of the body tub of a 30’s roadster, because that’s legal too.

So, if I seem hesitant to start working down the CAM path, hopefully this illustrates why.   The class needs restrictions on wheelbase, overall width, wheel/tire (vs. weight), ground clearance, weight distribution, and aero.  Let people get to those limits however they want, but restrict the end values of those easily measurable and understood dimensions to keep the ridiculous sorts of cars described above, from ever being built.

The current arms race in the P-T community should remind us all what has happened countless times in “run whatcha brung” forms of racing.  Everything is fine until people actually start to care about winning.

To everybody out there that might build for CAM – be careful with your wallet and energy – the mods you do today, may not be legal in the CAM of 201x, should the class survive.

For now I’ll be campaigning to have my car (and perhaps similar size-weight platforms like the Mustangs from the 60’s through the Fox) moved back into STX for 2015.