As the car gets further developed some of the interesting questions from early on are finding answers.

One of those had to do with the car’s width.  It is spec’d at 72.3″, which is quite a bit wider than the competition:

Over 2.5″ wider than the closest car, a significant difference.  The general pages on this site around Transition and Skidpad performance go into detail on the pros and cons of width.  Unfortunately in autocross, width is mostly a con.  However, the measurement of width is not an exact science – where do you measure?  Do you include things like door mirrors – which are high enough to miss cones and therefore not matter for autocross?  Were all those cars measured in the same way?

A commonly used measurement is the distance, on the ground, between the outermost edges of the rear tires.  That number best represents how wide your car’s ass is, and how careful you’ll have to be in getting it through the course without knocking things over.

Super Stock C5 Z06 Corvettes are usually around 72-73″ in this measurement.  The C6 Z06 is a bit wider, in the 77-78″ range.  The Viper is also about 77.5″.  I also remember performing this measurement on James Gunn-Wilkinson’s 996 GT2 the year it won ASP nationally – it was only about 69.5″ wide, even with 335 tires on wide wheels.  That was a real advantage over the ASP C5 Z06s, which had swelled into the 77″+ range to fit their big SP tires.  Some CP cars have been measured over 80″ wide!  Perhaps that’s why sometimes their driving efforts look like Kim Kardashian trying to make it through the turnstyle on the Paris Metro without touching the sides… 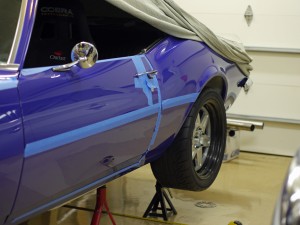 Given the specified width for the Camaro, was expecting a number for the rear in the 71-73″ range.  Delighted to find, the value was only 69.25″.  I estimate between 1/8″ and 3/8″ per side the wheels could be spaced outward, if needed.  That’d get the rear width measurement up close to 70″, but still, that’s really not that bad.  Besides the width penalty in transitions, an additional downside of adding rear track, is it increases the wheel speed differential between the inside and outside rear tires in a corner, which can be troublesome to certain types of limited slip differential.  Narrowing rear track is a common trick in trying to mitigate diff problems.  On the plus side, additional rear track reduces total rear weight transfer at a given lateral acceleration, leaving a little more weight on the inside rear tire for acceleration.

Since the Sunken Battleship post from a couple weeks ago, have since procured various spacers for the front end.  Good news, looks like a full 1″ of spacer in front passes.  Can even turn to full lock at ride height! 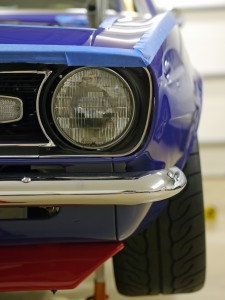 This is a much better situation – both for appearance and for performance.   It’s only a ~3% increase in front track, but that means 3% less weight moved across the axle, which could mean as much as 1-2% more potential front grip.  Next set of STX wheels will probably be built with a lot less backspace.  Advantage of these, is the tires could be stood straight up (zero camber) and still fit ok with the spacers removed.  18×9’s with only 4.5″ backspace (which these effectively have now) will only fit right with a ton of negative camber on front.

Raised the front a little bit too from last time.  It looks a lot less tucked, but a big part of that is this tire is about 1.5″ shorter than the vintage-style Avon. 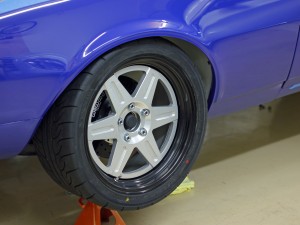 With the spacers, the equivalent measurement to the one quoted above for the rear – 71″.  Very pleased by that – a front track wider than rear should really help the chronic understeer these chassis seem plagued with.  Front width is more manageable too when driving, largely because it’s part of what you can see!