You sunk my battleship

In part 4 of Comparative Vehicle Dynamics we went through looking at the key variables contributing to lateral grip and skidpad performance.  Both these things are very important in autocross, where you spend the vast majority of time at the car’s lateral limit. 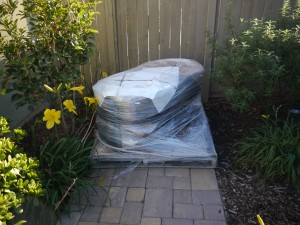 (Wheels and tires arrived on their own pallet, very nice!)

One of those key variables is track width – the wider, the less lateral weight transfer, and the more potential grip at the axle.  This width ends up costing later in transitions, but my preference is still to take the wider track width, especially on a car that is somewhat under-tired compared to its competition.  Especially too in the front, where the width tends to be a bit more manageable through slaloms.  Especially three, in a car that has craptastic front suspension geometry, no ABS, etc.

When measuring for front wheels, most of the look-see was done at ride height, with the camber values around -1.  I knew I’d run more negative for racing, but on the weird chance I ran more straight-up for the street or whatnot, wanted to be sure the wheel/tire wouldn’t be out of room outboard; a wheel too far inset can be pushed outward easily with spacers – ones too far outboard, require the use of those hard-to-find “negative displacement spacers” 😉

It looked like 5″ backspace might just barely be not enough backspace in front, and since it was easiest to step in .5″ increments, went with 5.5″ front backspacing.  This was a bit of a bummer, since 5″ looked perfect (and after delivery still appears perfect) for the rear, meaning the front and rear wheels would (and do) have different dimensions.

When putting the car back on the ground for the first time in forever, I had the front suspension at its full -6 degrees camber.  While the exact amount varies based on tire diameter and where you are already aligned, in general, for every one degree of negative camber you add, you move the top of the tire inboard by about .1″.  So by adding over 4 degrees more negative camber from where I was when first measuring for wheels/tires, I moved the top of the tire inboard by over .4″, almost half an inch. 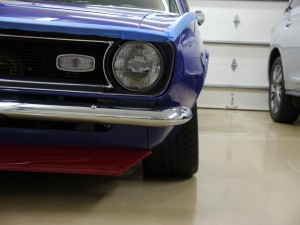 In the 240sx world when I owned mine, some people worked to get their wheel/tire combination pushed every last bit out to the limits inside their fenderwells.  Tires so close to metal, you’d swear there’s no way they’d clear as the suspension moved, yet somehow they did.  This was the pursuit of “flush stance” and those that achieved it were “hellaflush”.  While this pursuit is mostly for looks, I happen to generally agree with the idea, as the further outboard you go, the more you’ve widened the track width.  When done right, I think it looks good.

For every trend that gets branded, the opposite of the trend has to get branded too, and those that ran wheels/tires with too high an offset, or too much backspace, were said to have “sunken battleship” – because the wheel/tire appeared sunken into the wheelwell when viewed from the side.  That’s how the Camaro looks with this backspacing – ugly and certainly not hellaflush! 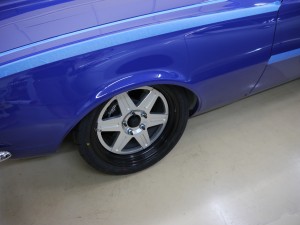 I have some wheel spacers to go buy now for sure.  Won’t be able to get the wheel/tire all the way out to the outer edge as is the modern style, with this car under the ST ruleset.  The wheelwell is made of metal, and there is no allowance for its modification.  Just inside of the outer blue fender, the inner fender has a flat plane for 1″ or so, before it forms a bowl shape upward.  You can see it somewhat here, the wheelwell on the right has its outer portion facing the camera (inner portion is not a problem): 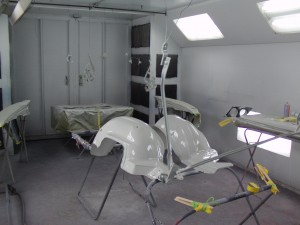 Because of this, the front of the car would either have to be up really high (blech!) or have a bit of the sunken battleship.  I believe the wheels can go outboard at least 1/2″ from the above, possibly up to 1″ per side.  Based on some Photoshop pixel math, it looks like the wheels need to go outboard 1″ to have the outer portion of the tire at the ground in line vertically with the exterior fender lip.

In addition to the extra track width on the end that needs it, this has the additional benefit of allowing for a bit more steering lock before the tires start to rub the frame inboard.  But most importantly it should look much much better!!!

Would have a profile shot of the whole car on the ground at this point, but it looks ridiculous, as the rear springs are about 3″ too high.  Like a wonky dragster, but worse.  New rear springs are on order but will take while…ugg…