Yesterday the other two Vintage Engineering magnesium wheels showed up.  There are the best replicas of the wheels used in the Trans-Am racing series you will find anywhere.  I went with the American Racing Torq-Thrust 5-spoke design, though the Minilite design everyone had switched to by 1969, is also available. 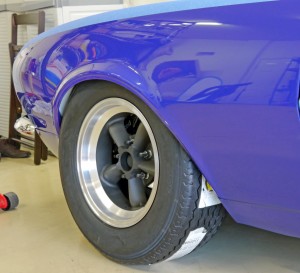 Nobody really makes magnesium wheels any more, and there are a lot of interesting tidbits to know in the “care and feeding” of mags.  Since they are cast, they have some fragility – you don’t want to use more than 25-30psi when seating the beads, as the explosive force of the tire seating, can actually damage the inner flange on the wheels, which is not generally repairable.  Fortunately the Avons beaded up with under 20psi – these are no 30-series R compounds!

Second, you don’t want to use normal tire-mounting lubricants, because water and soap is bad for magnesium – especially so anything left inside the tire, as it will just sit and eat away at the metal over time.  The barrels of these are painted, but it only provides so much protection.  The tires were mounted today using a bunch of WD-40 as the lube.

Quick shout-out to the folks at the Discount Tire at Balboa & Genesee in San Diego.  I have been going to those guys for years, and when other shops in town turned away me and my big and difficult-looking SM240 or Viper wheels and tires, the crew at this Discount always helped me out, getting things done quickly and without incident.  If you’re in town I highly recommend them!

Third thing is that like Gremlins, you don’t want to let them get wet.  Of course some moisture is inevitable, but if left on an unprotected surface, it causes magnesium to oxidize and eventually pit.  Magnesium parts last a lot longer in dry climates – fortunately San Diego is arid/desert climate, and I’m far enough inland the ocean salt air is not a problem.  The spokes and inner barrels of these wheels are protected with a “DOW 9” galvanic anozide – fancy chemical tech from WW2 which holds up and protects the magnesium better than paint can.  Only the outer lips are left unprotected, which polish up beautifully, and can be protected with a corrosion-inhibiting oil like WD-40, though for these wheels I was recommended Gibbs by Ray Franklin at Vintage Engineering. 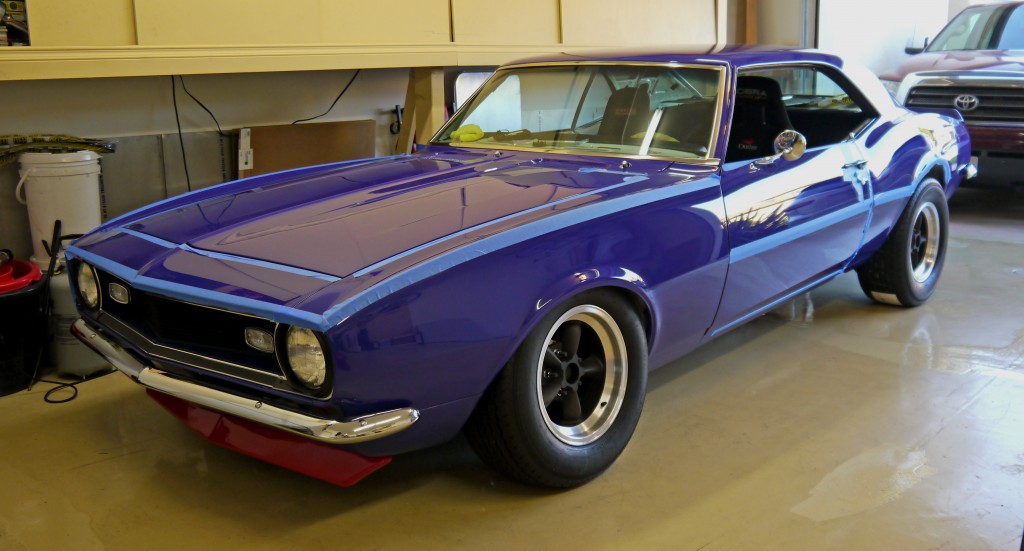 I really like these wheels.  In looking at a million pictures of Camaros, it took me about 999,000 images before I realized why I prefer the looks of the classic Trans-Am cars over any of the megabuck modern Pro-Touring cars – it’s the tall sidewall on the modest-diameter wheel that does it.  There are some nice modern designs out there in strong and light wheels from companies like Forgeline and CCW (remember I was originally considering CCW way back when) that are extremely popular with the restomod crowd – but unfortunately none of their designs really fit the vintage look.  There are even a ton of manufacturers replicating the Torq-Thrust wheel design, but for one reason or another – spoke shape, colors, maybe even the grain texture in the aluminum used – nothing seemed to fit. 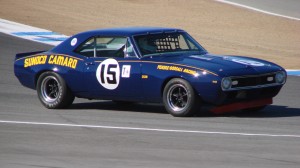 Since 18″ is today’s hot wheel diameter and all the good modern ST tires for the Camaro come in 18″ sizes, decided to attempt emulating the short-wheel, tall-sidewall look with the Jongbloed 214 wheels I had built for STX: 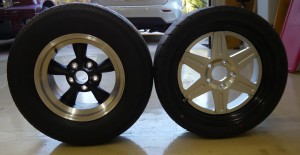 If you’re comparing these two wheels/tires from a distance, they don’t look much different.  The one on the left has a silver lip with black center, the one on the right is silver from center to the lip…or is it? 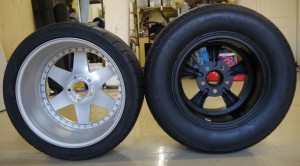 how state-of-the-art wheel & tire technology has changed a lot in 45 years.  The Jongbloed here with a 265/35-18 Neova, has a sidewall that’s only about 3.5″ tall.  The Vintage Engineering wheel with its 275/55-15 Avon CR6ZZ, has a sidewall that’s almost 6″ tall.  This is just how modern when and tire design are going – larger and larger diameter wheels, with shorter and shorter tire sidewalls.  There are benefits to this – more responsive tires, room for bigger brakes among them – but a lot of it seems to be to help make today’s huge cars appear smaller.  Heck – the Infiniti JX35 you see peeking out in the photo below, comes with 20″ wheels from the factory!

On the offset/backspace/sunken battleship front, the Vintage wheels are not nearly as bad off.  The fronts are only 4.25″ backspace, and as you can see in the first picture, they have no room to go further outboard, even if the car was raised an inch or two.  From the front it still looks a little weird but not too bad I suppose: 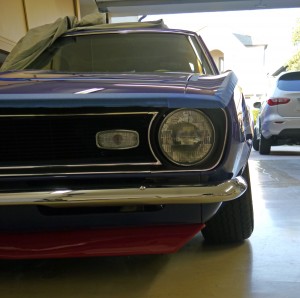 With their shorter height, I should be able to get the STX Jongbloed wheels out at least this far.  Sort of a bummer the Camaro’s inner wheelhouse is all metal – there’s another inch to go outboard per side without changing the fender’s exterior contours one bit, but doing so would require re-shaping the inner wheelwell structure, which isn’t permitted due to it being metal.  Another two inches of front track width would be of tremendous benefit to front grip.  One could conceivably raise the car up enough to allow for the track width increase, but that would be something like a 10% increase in (worsening of) CG height, in exchange for about a 3% increase (betterment of) track width.  Not a worthwhile tradeoff.

Speaking of raising and lowering, ride heights are all wrong, this picture illustrates it best:

As mentioned in a recent post, the rear ride height is too high by about 3″, waiting on some new composite leafs to bring it down to earth.  Front is too low, especially for these tires.  They are 26.7″ tall front and rear, making the fronts about 1.5″ taller than the STX race wheels and tires.

Believe it or not, this looks a lot less bad than the car did on its 18″ Neovas.  Partly because of the equal tire height here front to rear – the Neovas are 1″ shorter in the front than the rear, exacerbating the dragster-ish ride height weirdness.  Next time the car’s in the air I’ll probably raise the front an inch or so, just to be conservative.  Actually a little concerned I may not be able to make it through the gutter at the end of my driveway and onto the street, without damage.

Will be nice to get the rear lowered – at the moment it’s not doing a very good job of hiding its horse-and-buggy underpinnings! 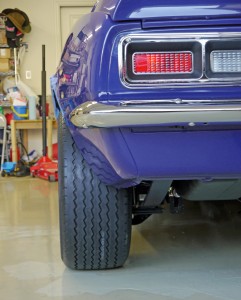