It’s more like iteration #20 given how much changed before the car was first driven…but, more changes are in order after the El Toro Pro Solo.

One thing that’s helpful is an external view of the car.  Stills and video can tell you a lot.  Take for example, the “crazy, it looks broken!” -6 degrees camber I started the car off with.  Then look at this picture from the San Diego Tour: 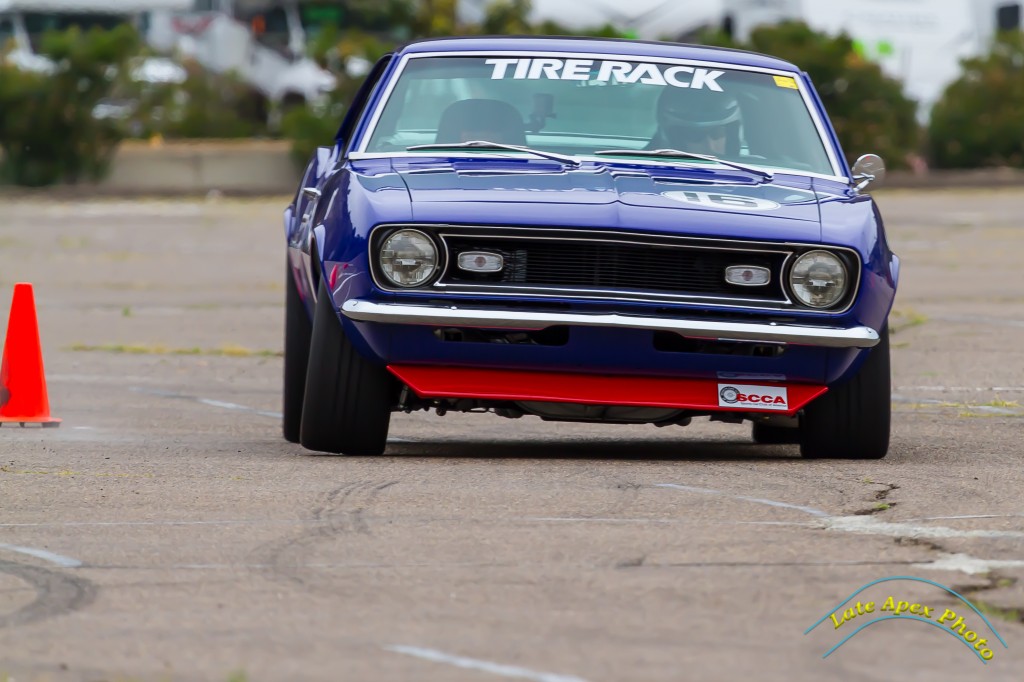 This is on the low-grip San Diego surface, and the car doesn’t appear to be that heavily side loaded – the outside front tire looks to have “enough” negative camber, but certainly not too much, from this angle.  Sure the inside front is only halfway on the ground, but it’s so lightly loaded, it’s not doing much anyway.

So negative camber in the front will stay where it is for now.

Overall the car’s handling balance felt pretty good on Sunday morning at El Toro.  Some of that may have been the higher grip, but in different situations I felt I could reach the limits of the front or rear tires at will.

At least, most of the time.

The car felt bad under braking, like it kept wanting to kill me.  My first spin in the car was under braking, and that was after almost spinning once in San Diego, and once earlier that same run, on the brakes.

This has proven to be too much rear bias.  The next calipers I’ll try are smaller rears, still 4-piston but with only 1.6 square inches of piston area.  That seems like a big change (and it is) but there are a few reasons stacking together-

The other planned change was assisted by another external source, this time video, the documentary embedded in the previous post (http://www.youtube.com/watch?v=meybtwmMxQY)

In it, at the 2:33-2:34 point, you see the car brake for a left-hand transitional type element.  The front suspension very quickly goes from somewhat extended (on throttle) to hunkered down.

If we recall the shock dyno for the front shocks- 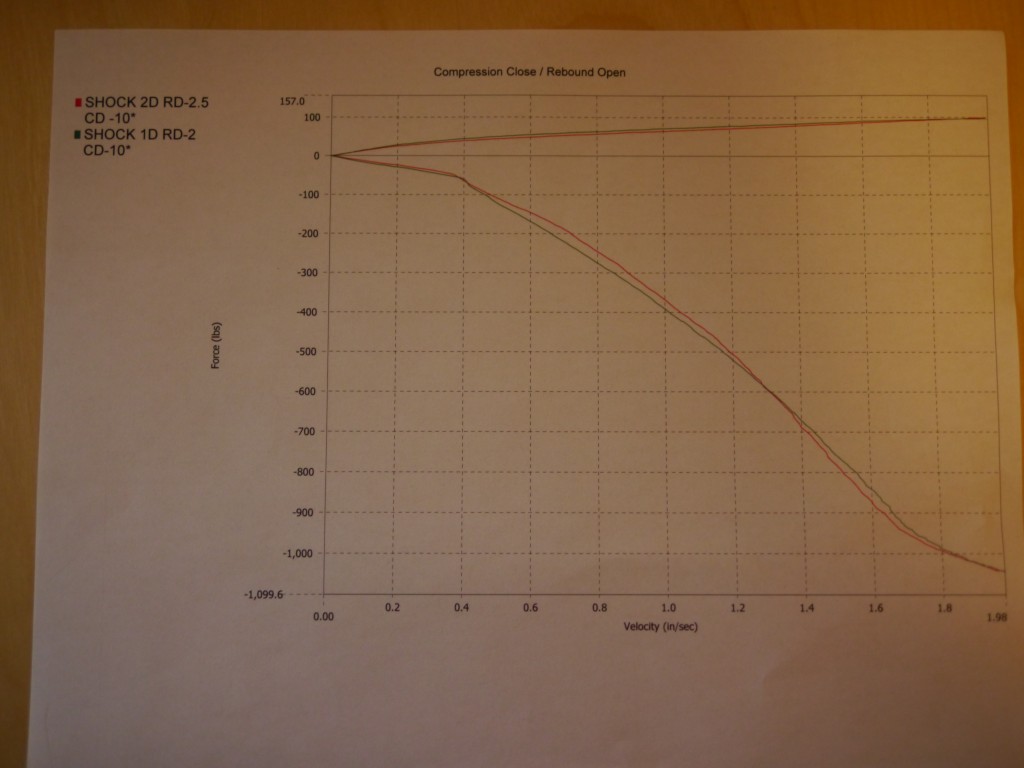 we’ll remember, they are extremely light on bump damping.  The shocks are just as geometrically disadvantaged in bump as they are in rebound, where we have almost 1100lbs. @2in/sec.

The soft front bump was another dimension of the “I don’t want the car to push” sentiment that went into its initial setup.

In my experience, a car with too much front bump, won’t turn.  This was mostly a problem in the old FWD Civic days (nothing FWD really likes to turn), but I found it could even be a problem on the 240sx if front bump was turned up too high on that car’s Koni 28’s.

This is maybe the first time I’ve experienced “too little” front bump.  But I’m jumping ahead here – let’s look at it as a handling issue to solve:

The mid-corner part makes me thing the spring/bar/roll center parts of the equation are *close*.  Too soon to call anything perfect, but close, a lot closer than shocks.

The car is way too loose in phase 1 and 3 – and as rarely happens when looking to shocks, there is a change I can make there, that fixes both – more front bump!  The no-free-lunch part is it should loosen the car a little in phase 3B, but maybe that’s ok, we’ll see.

The Camaro has been at full stiff for front bump since Sunday in San Diego, and could use a whole lot more.  Again, part of my mantra is that no adjustment should ever be at its limit under normal circumstances, and because of the coarse nature of early tuning, I’ll be making a big change.

Front shocks will be going back to ProParts for a revalve.  Rebound is good where it is, but with bump I’ll be looking for an adjustment range that puts 700lbs @2in/sec. at the midpoint.  That’s about 7x the bump the front shocks have now.  But keep in mind, as it relates to the actual chassis, with motion ratio accounted for, it’s about the same as having 250lbs. of bump at the rear shock, a more typical force level.

Last bit of tuning in regards to steady-state and the lateral load transfer distribution – to provide for maximum accelerative capability out of the corner, we want as much weight as possible on the inside rear tire at corner exit.

To do this, requires unloading the inside front tire completely.  But you don’t want it lifting too high, or too often.  This is a screen capture from the documentary video, showing the car crossing the finish line under power – it looks like it just barely for a millisecond, lifted the tire.  Didn’t notice it doing it from the driver’s seat, and it only did it a tiny bit for a tiny moment, making this another indication that this combination of springs and bars is pretty close to how it should be. 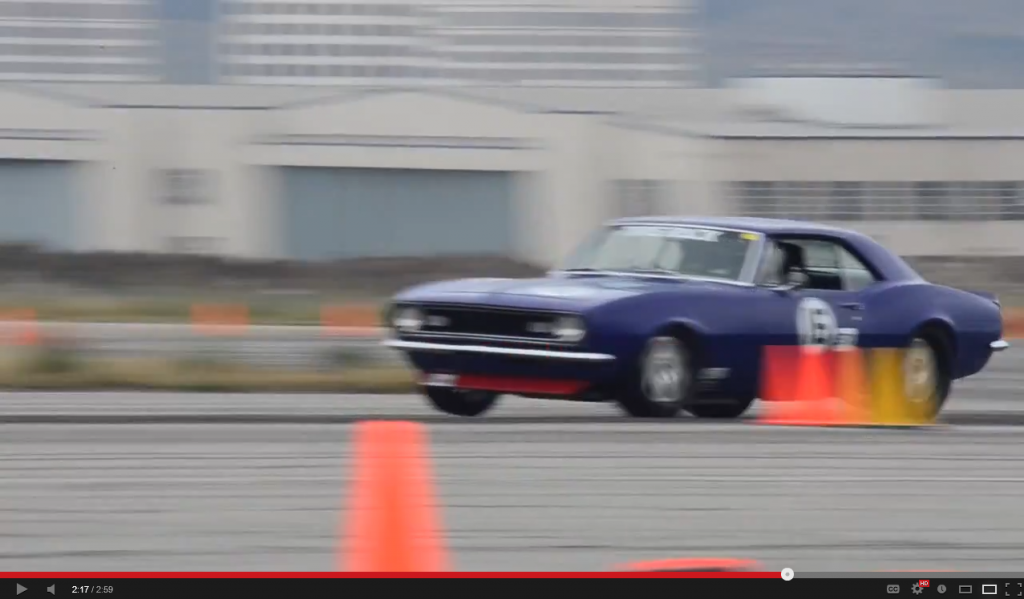 Will probably be a while before I get the car back out again (also need to replace the ignition system – again) but it should be a lot better next time.  Have a lot of time to make up on the rest of the STX field!