I received a really nice email today from a fellow named Louis, who pointed out an important oversight I’ve made.  Specifically: 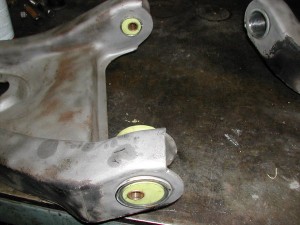 B. Suspension bushings may be replaced with bushings of any mate-
rials (except metal) as long as they ﬁ t in the original location. Off-
set bushings may be used. In a replacement bushing the amount
of metal relative to the amount of nonmetallic material may not be
increased. This does not authorize a change in type of bushing (for
example ball and socket replacing a cylindrical bushing), or use of
a bushing with an angled hole whose direction differs from that of
the original bushing. If the Stock bushing accommodated multi-axis
motion via compliance of the component material(s), the replace-
ment bushing may not be changed to accommodate such motion
via a change in bushing type, for example to a spherical bearing or
similar component involving internal moving parts. Pins or keys may
be used to prevent the rotation of alternate bushings, but may serve
no other purpose than that of retaining the bushing in the desired
position. 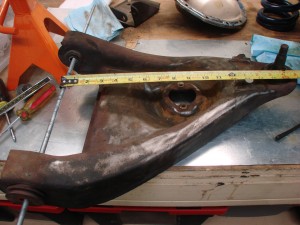 So yeah, um, that’s exactly what I just had made.  Oops.  John built them exactly as I asked, this was totally my bad.

I completely missed that bushing restriction when designing these pieces.  That bushing rule is lengthy and difficult to pay attention to the whole way through.  Of course I ought to know it a bit better as I’m on the STAC – the Street Touring Advisory Committee, the group of volunteers who works to maintain the ruleset for the Street Touring autocross category of preparation within the SCCA.  Duhhh!

Many thanks to Louis for pointing this out to me!  New custom bushings are going to cost a bunch of $, but I’d much rather this, than show up with an illegal car.  Along those lines, if my readership spots anything I’m doing that’s blatantly illegal, please don’t be afraid to mention it to me.  Part of what I hope to get from all the effort in creating this blog is help from its readers, in ensuring I’m doing this right.  Or legally, at least.  🙂