The rear end from this car is GM’s lighter-duty “10-bolt” axle.  While it’d probably be able to hold up to the power I’ll be making with the tires I’ll be using, the Z28 came with a 12-bolt so that’s what I need to get.  The 10-bolt came out today- 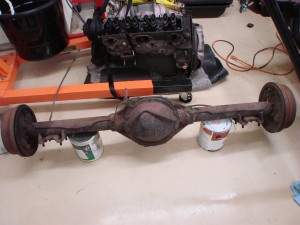 Sucker is heavy, I didn’t weight it, but 120-130 pounds is probably about right.  I peeked under the drums, the rear shoes were worn down to their rivets.  Wonder if they’re the originals??  Haha.  I tried not to get too close, there’s probably asbestos in them, not to mention all sorts of other places.

With the axle out of the way I also pulled the fuel tank.  Figured with all the welding about to happen back there, didn’t think it’d be a good idea to have 10 gallons of it in there.  Instead of siphoning I pulled the tank out with the gas in it, and poured into spare cans.  Lots of room back under there with all that stuff out of the way. 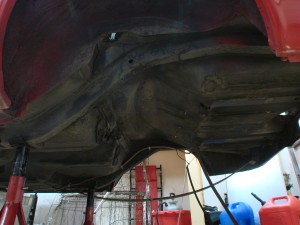 Played around a bit with the front suspension, see what sort of bump travel I’ll have available.  It looks like it actually starts to curve the right way at the extreme of bump travel, will have to see if I can actually operate there.  Was thinking I’d need to find a donor 265/35-18 tire for test fitment, but checked and found the 245/60-14 tires I got with the car, are actually the same diameter!  Obviously the “real” tires will be an inch or so wider, but this should help get the suspension travel range in the ballpark.

Found a smokin’ good deal on the driver seat I’ve always wanted.  It showed up a few days early, so that was a nice bonus.  Won’t be showing it off ’til it’s all mounted in the car. 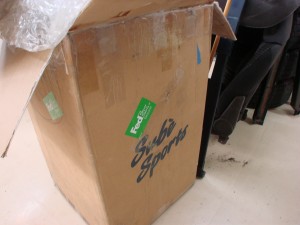 Not a whole lot left to do in teardown.  Going to leave the steering intact for now to make it easier to get the car on the trailer.  Need to finish pulling the brake hardlines and stripping the interior.  Need to acquire a 12-bolt, then get it going on the road to re-assembly!