Got a bit further into the suspension today.

Thought I’d start the day by pulling the seat covers off the rear seat frame, to help get rid of some of the smelly funk in the garage.  I had planned to maybe replace the whole thing, but each frame for the bottom and back is bucks ($600+) so figured I’d strip it down the the frame, powdercoat, then re-cover. 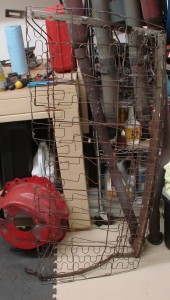 There were TWO covers on the bottom!  Instead of re-covering the original, someone put a new black cover over the original blue vinyl.  All this mess was held in by a million of the little metal bent staple things.  Probably a pound weight savings right there!  Will be nice to have that stinky stuff gone but doing so burned a ton of time.

So on to the rear suspension.  Got the rear axle free of the springs and brake lines, and jacked it up to around where I figured its “working” ride height would be.  Wanted to see how much room there’d be to package the gear I have in mind for back there- 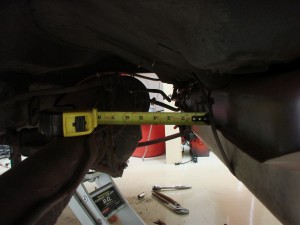 Looks like 5″ from this pic but it’s really more like 4-4.5″.  Will probably be enough for what I want to do.  I imagine some people are expecting me to introduce some kind of new-fangled cutting edge live axle lateral locating device, but unfortunately for them, I have no such plans.  Effectiveness, light weight, and simplicity are the goals.  Surprisingly, none of the big aftermarket vendors for these cars make a simple panhard rod kit.  There are a few watts link kits out there, but they all look very heavy.

Below is a simple and effective lateral locating device found on a very successful car. 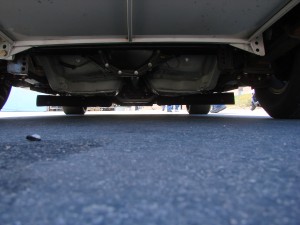 From the factory, the car depends on the leaf springs to function as the springing medium, but to also control the axle’s lateral, longitudinal, and torque movements.   In a way this is really clever, as you don’t need all sort of control arms and bushings, it is all really simple.  Unfortunately as with anything you ask to do too many things, the leafs end up compromised and not doing any one of those tasks very well.

Below are the leaf springs I plan on running, at least initially.  I have to stick with leaf springs per my rules, can’t go to coils, and things like springs embedded within the shocks are also not allowed.  I could try to do some sort of crazy progressive bump stop tuning to use those as the spring, but I don’t like bump stops and don’t plan on running any.

These are Hypercoil composite leaf springs, one of them side-by-side with a stock mono-leaf rear spring.  The Hypercoil spring here is 250lb/in., and has about 3″ less “arch” than the stock spring.  I suspect even with that much less arch, the rear of the car is going to be too high for my purposes.  The spring I pulled off the car had a rate probably around 80lb/in.  The ’67 Z28 had a stiffer stock rate, probably around 125lb/in.  Double that rate sounds high but I don’t suspect it will be, as tire and shock technology has come a long way.

This will give the rear a ride frequency just over 2hz, which should be in the ballpark.  There is no real “motion ratio” for a live axle in ride, a 1″ suspension movement equates to 1″ of spring compression.

Ride height adjusments aren’t very easily done with longitudinal leaf springs, so that’s something I’ll have to work out when the time comes.

Oh, these composite rear leafs as a pair are over 11 pounds lighter than my super-soft stock rear steel mono leafs.  Not a huge reduction, but for a car using big multi-leafs to achieve a high rate, probably lots more weight to be lost.

The front fares a bit better.  It uses a traditional upper and lower a-arm suspension, albeit with really awful geometry.  It’s funny to see, at full droop, the car actually has several degrees of negative caster. 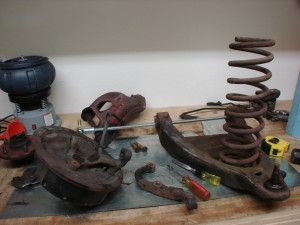 The stock spring is 16″ long!  16″ also happens to be the effective length of the lower control arm – the distance from their inner pivot point, to the center of the lower ball joint.

The shock mount and spring seat is centered at a distance of 9″ from the inner pivot point.   This gives a not-too-great motion ratio of .316.  What this means, is we don’t get a lot of travel at the spring/shock for a unit of travel at the wheel/tire.  This necessitates higher spring rates, and shocks that can properly handle those higher spring rates.  Fortunately I have a really great set of shocks left over from the Viper, so I should be able to get the valving I need.  I haven’t seen the motion ratio for a first-gen Camaro published before and didn’t know how it would be until I put the arm on the workbench today.  Seeing it now I’m not surprised people have trouble getting them to work well with stiff springs.  Unless you go to a custom arm that really improves the motion ratio, you’re going to need a shock capable of massive low-speed damping to keep one of these front suspensions under control.

My STS 240sx used 550lb. front springs with a strut suspension that provided near a 1:1 motion ratio, its wheel rate was around 500.   That was pretty high for a car that only had about 700 pounds on each front corner.  Like the Camaro, it had really bad suspension geometry, especially when lowered, so I used a fairly high spring rate to keep it from moving too much; it also had a sharp fender seam that would cut into the tire on a bad bump.

To get an equivalent wheel rate is going to require a spring rate well up into the 4-digit range, over 1500lb/in. by my calculations.  I probably won’t go quite that stiff, at least not at first, as I plan to use a stiffer front sway bar on the Camaro than I used on the 240sx.  The stock spring rate on my Camaro was around 330lb./in, the Z28 of this year only had about 380lb.in.

My interpretation of this sentiment, is that if you can set your static figures (camber, caster, toe) in a good and happy place, then just not let the suspension move very much,  you are probably going to be okay.  Things like camber curves and bump steer curves are important, and if you’re in a class where the rules allow you to properly re-engineer those things, doing so is worthwhile.  But if you aren’t allowed to re-engineer those things, and are dealt (or choose) a car with crummy bump steer and camber curves, then give the car plenty of static negative camber (I ran -4.5 degrees on the 240sx) and make it stiff enough so the outside front tire is still in a “happy place” at terminal roll.  Sure, your inside front tire may be riding on its inner edge, but especially in these big heavy production cars, the outside tire does pretty much all the work in the corner anyway.

So the above summarizes my philosophy and approach to how I plan to make the front suspension on this car work.  It’s going to have a lot of static negative camber, people will probably think it looks funny.  Donohue never figured out a way to get the front of his car to work without a ton of static negative either, so who am I to try?

I’m also a big fan of adjustability, so the finished front suspension will fully adjustable for ride height, camber, caster, and toe using a combination of both the factory methods and the allowances we have in ST for camber kits and replacement control arms.  I think it is important as a builder to give yourself a wide range of adjustment, and to never be at the extreme of any adjustment range you have.   You should always have one more hole, or shim, or click of the knob to go in any direction, at least under normal circumstances (i.e., a normal dry surface).