The 2013 ProSolo Finale is in the books, and by most accounts it was a success!

In SCCA  autocross there are two series of events run in parallel – “regular” Solo competition consists of 3 runs taken on a given course, where there is usually a sharp turn before the clock starts, to eliminate a launch advantage.  Big events last 2 days, with the course run one direction on day 1, and the other direction on day 2, with the lowest sum time winning.  For the Solo National Championships, instead of running the same course different directions, you run two separate courses.

“ProSolo” consists of two courses set up in mirror-image, with competitors lined up side-by-side.  Between them is a drag tree, which brings the driver’s reaction time, ability to stage the car, and their skill in launching from a dead stop, into play.  In ProSolo the drivers get to run each course six times for a total of 12 runs – each course twice Saturday morning, Saturday afternoon, then Sunday morning.

ProSolo is a lot of fun, and the back-to-back runs can be pretty intense. 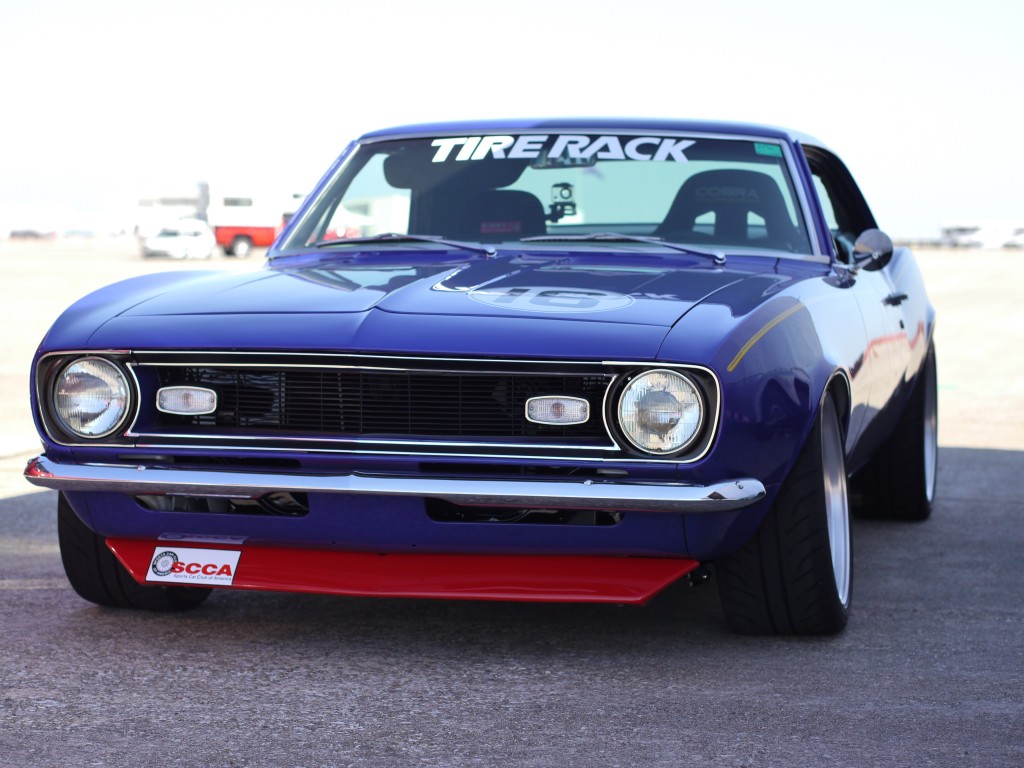 The week of National Championships in Lincoln Nebraska starts with the ProSolo Finale – the last event in the ProSolo series – there are winners for that event by itself, but since ProSolo has points, it also determines who is the year-end class champion.  After the Finale, the regular Solo National Championships are run – half of the people run on Tuesday/Wednesday, the other half Thursday/Friday – there are over 1200 entrants so it takes 4 days!

For me this year, the ProSolo Finale was mainly a big test and tune event to make sure the car is ready, and the driver is warmed up for the Solo National Championships I’ll be running Thursday/Friday. 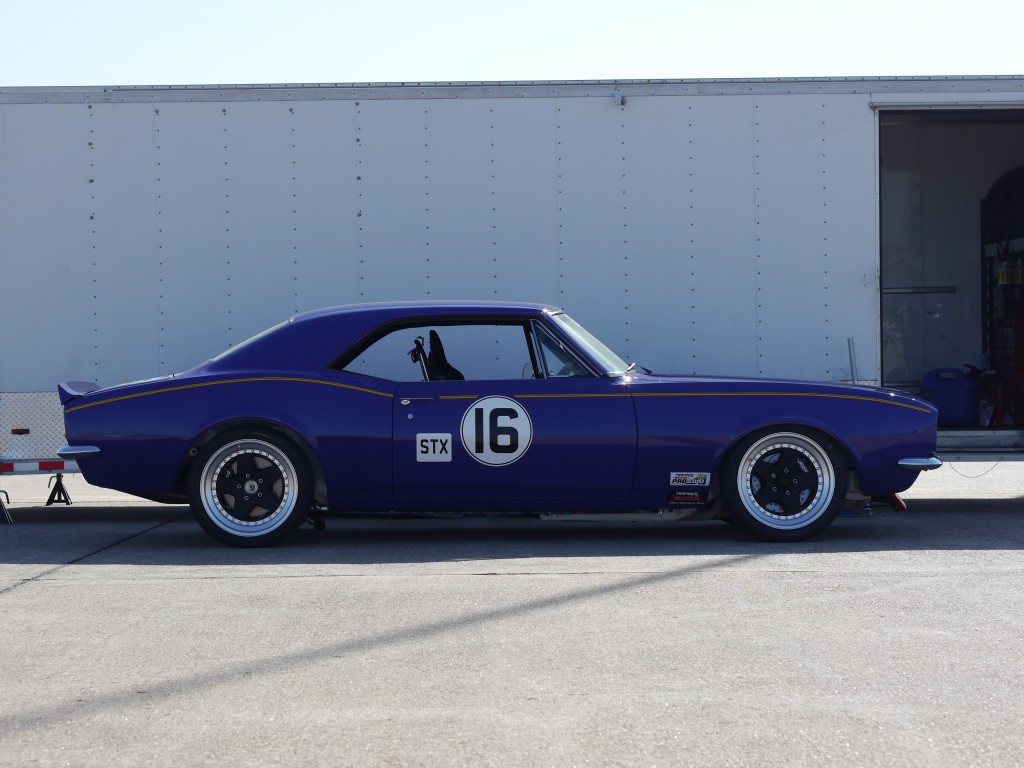 Having successfully completed the Pre-Nats Thrash of the previous post, got the car out to Lincoln with a long but smooth two-day trip.  Unloaded the car and took these photos – the wheels are CCW Classic-5’s – 18×9, with a lot less backspace than the Jongbloed’s I’d been running.  The CCWs are a bit heavier but have a nice vintage look. 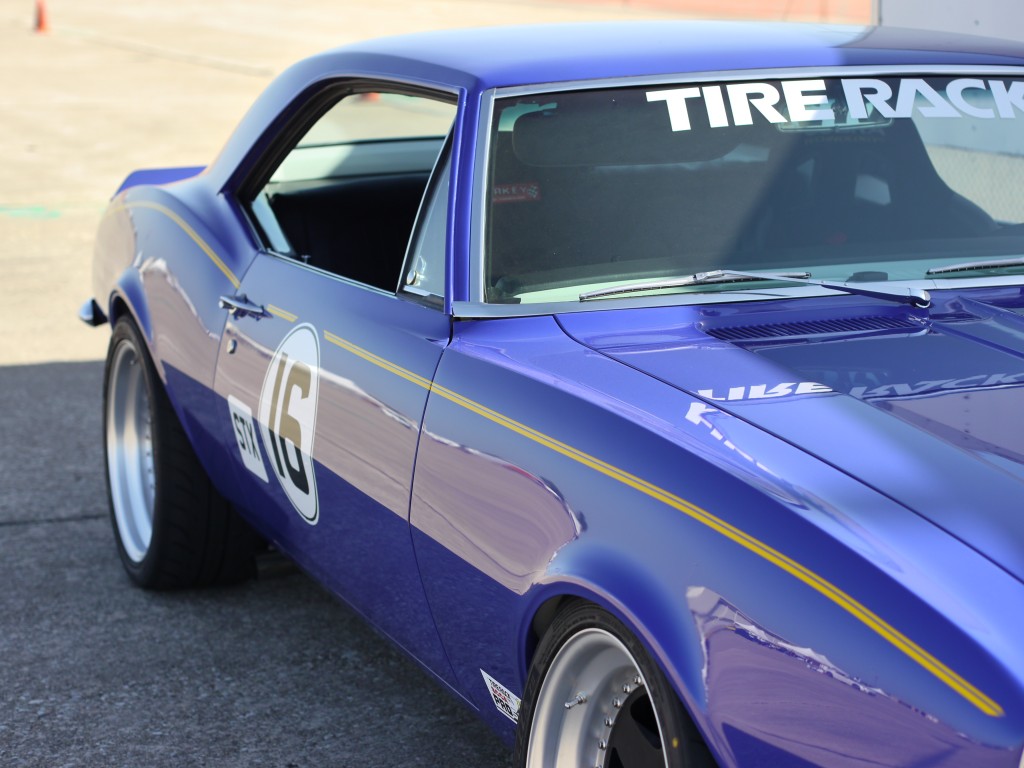 I’d signed up to run the Test ‘n Tune the Friday before the ProSolo just to make sure everything was ok and to get warmed up.  It was blisteringly hot that day (over 100) which made doing anything a chore.  At the test ‘n tune, on the first run, the car wasn’t running right.  I suspected it might be some intake tricks I’d tried, so I drove back to the paddock and undid the tricks, trying not to burn myself.  Back at the test ‘n tune waiting to do my second run, the car stumbled a bit, then shut off!

That seemed strange to me, and the way it died in a not-so-sudden way, more of a stumbling death, made me think it might be fuel.  In building the car I goofed and didn’t connect the fuel gauge sending wire, so I have no gas gauge – it’d been totally full for the San Diego Tour earlier in the year, but I hadn’t added any since.  The Camaro holds 18 gallons, which means that with Sunday morning runs at El Toro, the Farmington ProSolo, and a few other miles of miscellaneous putting around and idling, the car burned 18 gallons!

Fortunately the fix here was easy – add gas!  5 gallons in and it was good to go for my second test ‘n tune run.

On this run, something else bad was happening – there was a bad cycling rubbing sound coming from the left rear.  I’d been interested in how things looked back there, so I had the camera watching the left rear from the outside.  Sure enough, upon review, the axle was moving all over the place!  Big lateral deflection, combined with axle tramp, made the rear axle look totally out of control.  Somehow I’d been able to get away with this setup before…maybe it was the grip from these new-gen tires on concrete, maybe it was fatigue in the U-bolts holding the big sandwich together, not sure…but in any case, it was very not happy.

To combat this, I skipped the last two tuning runs, and headed back to the pits to get to work on the car.  Wanted to remove the big spacer blocks from the equation.  Since the axle perches expect a multi-leaf spring pack, and I’m running a single composite leaf, would need *some* spacer block.  Fortunately, the central warehouse for Speedway Motors is here in Lincoln Nebraska, only a couple miles from the event site 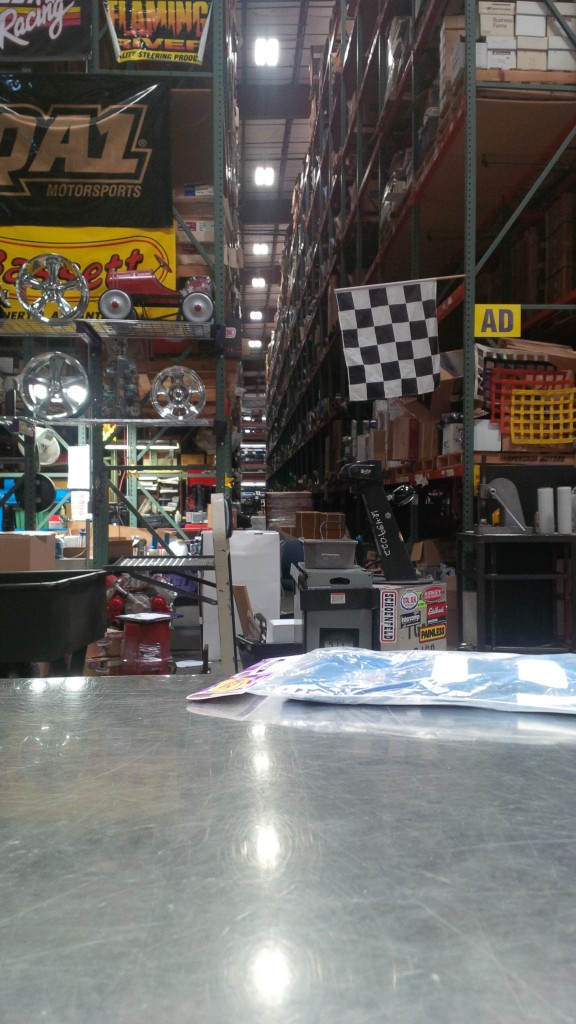 From their huuuuuge warehouse, was able to get 1/4″ and 1/2″ spring spacer blocks, and the 1/2″ turned out to be perfect – it snugged the plate for the driver-side watts link connection right up to the welded-on spring perch, reducing the leverage these parts had on each other significantly. 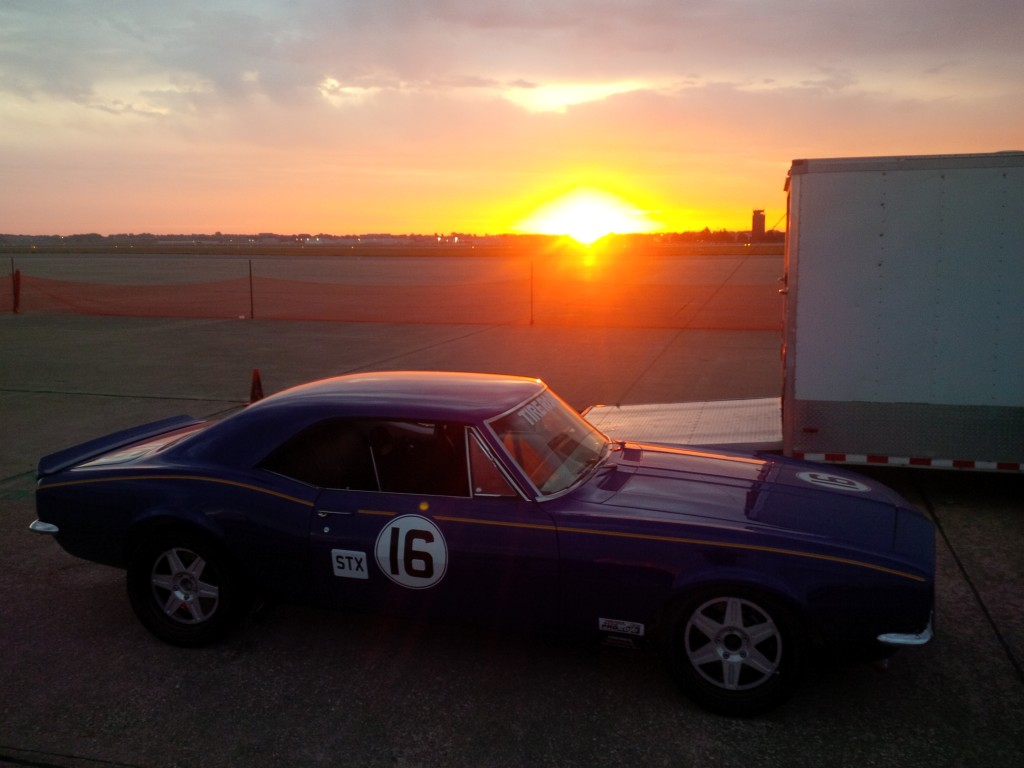 Saturday morning for the first set of runs I was rather apprehensive.  It was very hot out (already in the 90’s), and the car had two failed test ‘n tune runs the previous day, and no testing on the new setup.  To my delight, things went well.  The car completed its Saturday morning runs without issue – though I did happen to spin on my last run.  Times were quite a ways off the pace (about 1 second per side) but I was putting a lot of attention into the car – wanting to be sure it was running properly and healthy, and that nothing was rubbing or coming apart – instead of focusing on driving and hitting my marks.

Saturday afternoon was a bit of an improvement, even though it was extremely hot (100+) when we ran.  For this session I moved the camera under the fuel tank to watch what the axle was doing at the left rear:

Interesting to watch – lots happening under there in an autocross run.  Water temp was about 215 when I finished but all systems (cooling, power steering, charging, etc.) seemed to be taking it fine.

I wanted to adjust the valves Saturday evening before it got dark out, but doing so requires a cold engine – even after sitting for 2.5 hours after my Saturday afternoon runs, most of the engine was too hot to touch, so it was put off to Sunday morning. 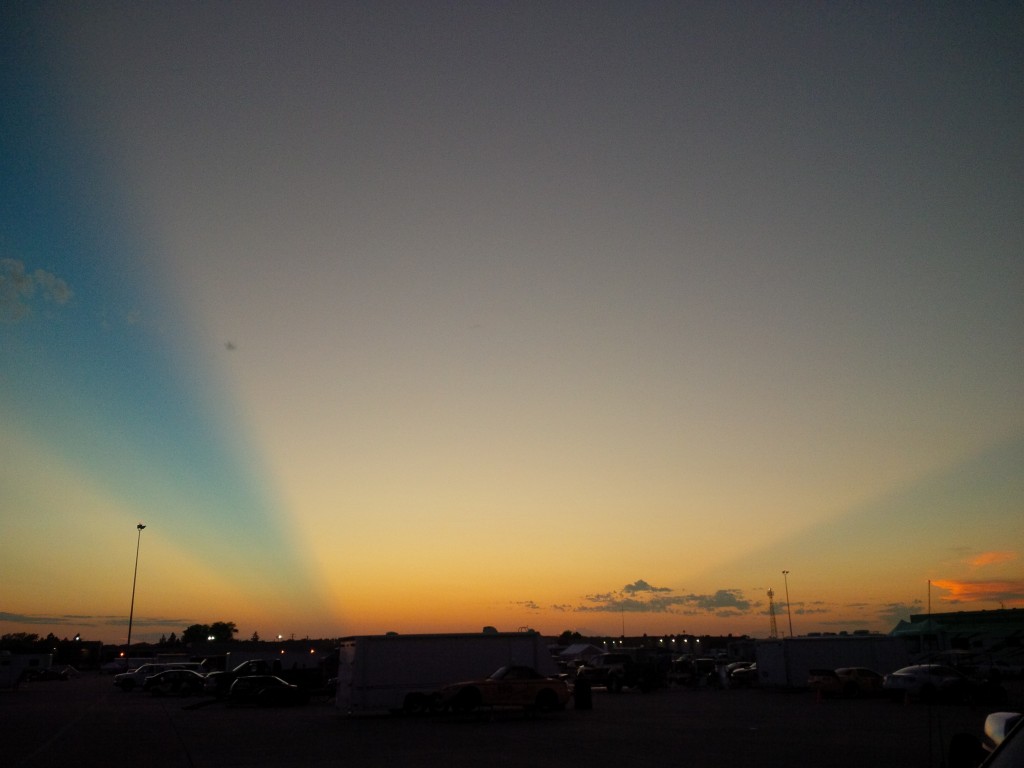 Sunday arrived at the site a bit early to do the valve adjustment.  Turns out the new rocker arms and balls wore-in quite a bit, and gotten far out of adjustment.  That was costing the car some power and could impact reliability, so I was very thorough in getting everything adjusted properly.

Sunday morning’s runs were better – it was cooler, the cornering grip levels had come up, and I was feeling more confident in the car holding together, allowing me to focus on driving.  Ended up dropping enough time to move into 5th place – with 15 drivers, good enough for the last trophy spot!  Pretty satisfying to get a trophy at only the car’s 4th event ever, against some very skilled drivers in “proper” cars.

Overshadowing the excitement of that result, is how still very far back I was from class winner Bryan Heitkotter’s times.  Bryan couldn’t get his Nissan 300ZX prepared in time for the Championships this year, with a silly excuse, having been called by Nissan to run a GT3 GTR at Infineon, over the last weekend he had to prepare the car.  So instead he ran Charlie Davis’s E36 BMW, the car he won Nationals in last year, a well prepared car he’s very familiar with, and fast in.  Bryan is running a different class for the Solo Nationals so he won’t be a worry there, though the class won’t have the same weight without him in it – for our measly entry fees, we get to run heads up against professional race car drivers!   Pretty fun aspect of SCCA autocross.

Between now and Thursday, need to figure out how I can go .6 seconds faster per 50 seconds of course – which was about the gap from me to the second-fastest STX car, since Bryan is out.  Some of that may come from driving, some from further tuning.  Will be a busy next few days for sure!

Here is a high resolution video of my best two runs from the ProSolo.