Finally got the rear shocks all buttoned up- 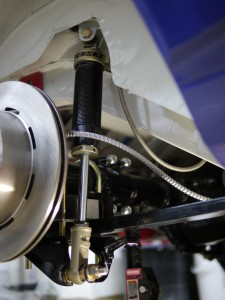 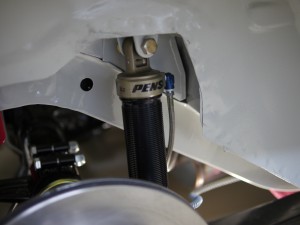 Not a ton to mention that isn’t obvious from the pictures.  Shocks are mounted inverted, which helps reduce unsprung weight a tiny bit.  In this case it also means the remote reservoir hose doesn’t move as the suspension moves through its travel, which should be a good thing for the life of those components.

Since the rear swaybar is a no-go at this ride height, was able to re-use the swaybar mount holes for little canister mount brackets.  Really happy the length of hose to the remote cansiters, and the way it bends around the frame rails without touching anything – worked out perfectly. 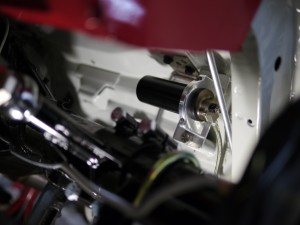 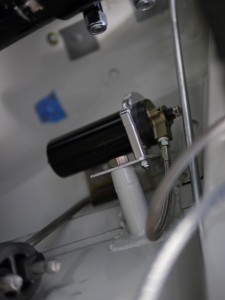 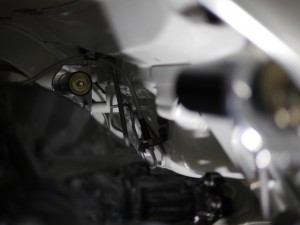 The rear shocks have four adjustments, in two locations.  Rebound and “shaft” (better come up with a better name for that, too likely to be the target of jokes) adjustments are in the window where the lower shock eyelet mounts to the leaf spring plate (as an aside – note this shock mount plate puts the shock in double-shear – most run the crummy single-shear plates) and adjustments for low and high speed compression are those two knobs at the top of the canister – not the easiest to get to but reachable if you lie beside the car.

Up front, the shocks are so buried, there isn’t much to see.  These things were a packaging nightmare!

Here too they are inverted, which provides the same benefits as the rear.  Though in this case it’s more a matter of packaging necessity, than preference.

Since one of the advantages of these sorts of shocks is the bling factor, and the fronts are basically totally hidden, here’s a couple pics before they went on the car: 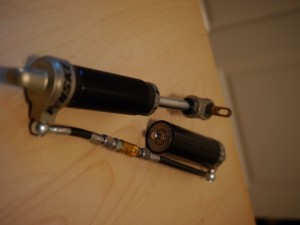 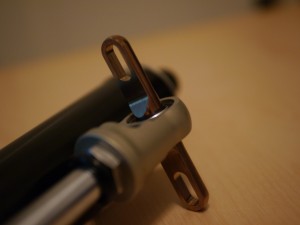 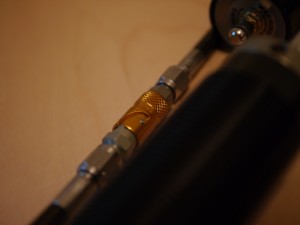 And on the car, buried as can be- 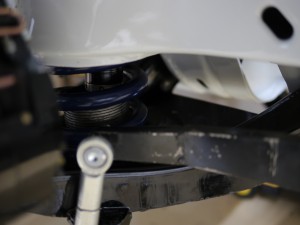 Thank goodness I chose the smaller 45mm bodied 8760s – they just barely clear the rear spring adjustment cup at full droop.  To provide room for the remote reservoir nonsense, had to run a 1″ horseshoe-shaped spring spacer up top, which for now meant completely removing the ride height adjuster at bottom.  To regain that ability, will need to get shorter springs, or cut these ones down a little. 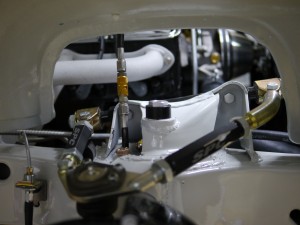 The canister is in a super-temporary spot until I figure out how to mount it in the engine compartment.

Front adjustment of compression will require opening the hood to turn the knob on the canister.  Rebound will require tools, as the “window” with the knob inside is buried in the lower control arm.  I’m going to change the way it attaches from this draft (which is approximately version 4.7) to allow the adjustment to be made with only one tool, and not require raising the car or any other disassembly.  I probably won’t change front rebound that often anyway, leaving it at max and hoping it’s enough.  The front shocks are capable of really big forces, but those forces drop off very quickly as the adjuster is moved away from full.

Speaking of those forces, here is a dyno of the front shocks, or at least, a portion of what they can do – note the x axis ends at 2in/sec. 🙂 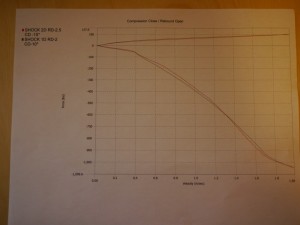