Watt a pain in the…eye?

Well, that was an awful weekend last weekend.

Thought I’d gotten through all the really gnarly work, but prep for the Watts turned out to be one of the toughest weekends yet, for a few reasons.

One, it was unusually cold in San Diego – not that it ever gets really that cold here, but there was a frost advisory with overnight lows in the 30’s.  Enough to make lying on the garage floor feel a bit like lying on a hockey rink…

Two, it was a bit challenging psychologically.  With composite leaf springs in the rear, the car has to have some kind of dedicated lateral axle locating device.  I set out to cut away a perfectly good one, that somebody had worked really hard on, to do something else that might be only a little bit better.  And if I ran into some kind of bad gotcha, that could delay things significantly.

But lastly and most of all – it was the crap!  The crap that flew everywhere as I cut away all the metal for the panhard – off the axle, off the chassis.  Went through about 15 cutoff wheels on my 4.5″ angle grinder.

It seemed like no matter how I positioned myself under the car, how I set the tool’s guard, and what direction the shower of sparks was flying, it all landed on me.  In my face, in my hair, and on several occasions, the searing hot crap seemed to find its way behind my tightly-strapped unvented goggles, right into my eyeballs.  On several occasions I had to stop and dig out what landed there.  Next time I’ll have better face/eye protection!

John had done a very nice and thorough job ensuring the panhard had a solid base to work from….which means it took a ton of effort to get enough of it out of away, for the Watts to go in cleanly.  Once the panhard was out of the way, the Watts was pretty straightforward. 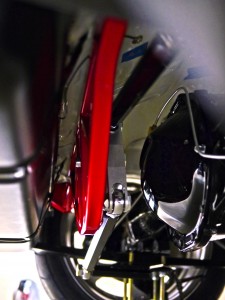 The unit bolts in, consuming the space behind the rear axle, where the factory originally packaged the muffler.  (Overall exhaust packaging beyond where it is now, is going to be difficult.  Will need to do something more, under-car dumps are kinda ghetto, and the car is a bit too loud still.)

The propeller for the Watts has 12 positions of possible adjustment, comprising roughly a 6″ range of rear roll center heights.  Fays2 recommends starting at 4 up from the bottom for “most people”; I started 8 up from the bottom, seeing as my car is 1-2″ lower in the rear than most people run.

They recommend installing the center pivot bolt from the rear of the unit – problem with that, is you can’t fit it in (except maybe on the lowest adjustment hole) with the fuel tank in place.  Even if you put it in the car with the bolt already pushed through, you wouldn’t be able to adjust the roll center height later without either pulling the Watts unit, or the fuel tank.

It’s funny too – in the early part of the instructions there is no mention of fuel tank removal, just wheels and normal stuff.  But then later around step 8 there’s a “now you can reinstall the fuel tank” line…seems like some selective editing.

Anyway it worked out ok for me – the propeller comes with a number of spacers allowing you to move it forward if needed, and defaults to one.  I ended up taking out that one spacer, which puts the center pivot bolt through the Watts frame on the shank of the bolt (instead of the threaded portion), so it should be just as good.  And this way I can adjust if needed!

On the driver side, the propeller runs to a new plate sandwiched below the spring and the factory lower spring plate.  On the passenger side, it runs to a new axle-clamping tube.  With these things, it’s important to get the angles and lengths identical from side to side; otherwise you end up introducing lateral movement, or other weirdness, into the suspension motion.  I ended up with link length of 16.5″ and an angle of 9.6 degrees from horizontal, running “downhill” away from the propeller.

Bounced the suspension a whole bunch (easy to do, still no shocks) and there is no perceptible lateral motion or bind in the system.  Will be interesting to see how it holds up to the world of autocross!