A couple things conspire to make mounting the alternator in this car tricky.

First, is the lack of allowance to change the mounting at all.  There are simple bracket kits out there to relocate it to the passenger side, which would help weight distribution, but of course this would not be allowed under our rules.

Another problem is the method used in the early Z28, was somewhat unique to those years.  The cylinder heads weren’t yet provided with the mounting bosses, so big wacky brackets off other parts of the engine, is the way.  Here you can see how the upper portion is a 2-part bracket pair, with one part hanging off an intake manifold bolt, the other shared with a water pump bolt.  This photo was meant to show off the oil fill tower, but of the ones I took it best shows how the brackets attach: 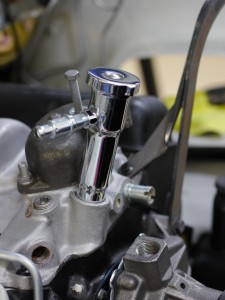 The parts are available to reproduce that part of the alternator mounting, but one more challenge awaits.  The picture here I borrowed from the site 67z28.com and the excellent photo restoration done there.  It illustrates how the alternator attaches to the engine at the bottom.  A cradle bracket, which affixes via two bolts, to a threaded part of the exhaust manifold!  Arrgh. 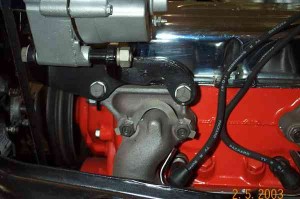 I have the black bracket pictured, but obviously my aftermarket headers are not going to have the provision to attach that bracket.  I’ll need to get the precise factory measurements, and modify my Swain-coated headers (due to arrive back tomorrow) with an additional welded-on piece, to allow me to hold the alternator bracket in this exact same way.

Funny thing is, I’ve seen some pictures of the headers originally offered with the early Z28s, and they had that part on there, a simple rectangular bit welded to the flange.